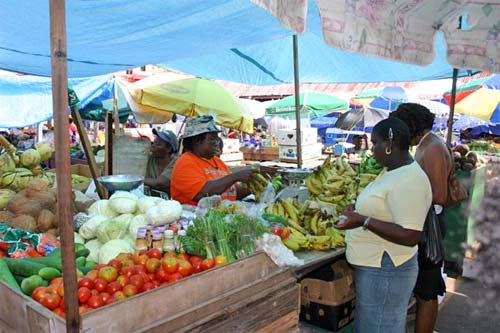 By Bert Wilkinson for ips news.

For much of late October, Caribbean ministers of agriculture, journalists, farmers and academics gathered in this tiny but picturesque south Caribbean island (Grenada) in a rearguard bid to refocus a region used to existing mostly for tourism on agriculture, given a mounting food import bill and fears of yet another global food crisis.

Few who attended the plethora of workshops, ministerial meetings and networking opportunities at the Caribbean Week of Agriculture expressed any doubts about the urgency of sounding alarms for a sector that has been treated as a distant cousin by governments, even though the dollar contribution of agriculture is as valuable as tourism in many countries.

The hundreds of participants who flew to this island that the United States invaded in 1983 appear to agree that a mammoth task lies ahead, on issues ranging from a dire lack of commercial credit available to farmers and the need to ensure planters have land leases to leverage bank loans, to crop theft and organised cartels importing food from North America.

“We have learnt some valuable lessons from the food, fuel and financial crises about how vulnerable the Caribbean is as it regards food imports and production,” said Arlington Chesney, director of the Trinidad-based Caribbean Agricultural Research and Development Institute (CARDI).

Elaborating on the vulnerability of small island states, Chesney recalled the chicken meat shortage in some nations following the Sep. 11, 2001 attacks on New York and Washington, noting that flights which usually brought hatching eggs from the southern U.S. state of Georgia were grounded like all others as authorities shut down U.S. airspace for more than a week.

Prices quickly shot up as chicken meat became scarce, he said, noting that the lesson is for the Caribbean to work towards producing more to feed itself.

“So when we talk about sovereignty, it is about the ability of the region to produce food for itself,” he said, announcing a ministerial decision to change policy tack “from the need to achieve food security to food sovereignty”.

Additionally, the Caribbean is now preparing for a likely shortage or protracted price hike in wheat flour because of major crop failure in Russia.

This could add to the already alarming collective food tab of $4 billion a year, half of which comes as ready-to-eat meals from outside the region that consumers and restaurants are increasingly favouring.

Meanwhile, farmers’ groups complained about their inability to access credit to expand production, improve technology and plant high-yield crop varieties because commercial banks regard them as “high risk” even though they produce something that every living thing must consume – food.

Jethro Greene of the regional farmers’ network called for a rethinking in this area if agriculture is to prosper, while Melvin Edwards of the Caribbean Confederation of Credit Unions pointed out that credit unions have largely prospered while many banks collapsed like ninepins in the 2008 crisis.

“We have learned that bigger is not necessarily better,” he said, urging farmers to support credit unions, where they can access low- and sometimes no-interest loans.

If accessing bank credit is a problem, crop theft is an even greater challenge, according to Hilson Baptiste, Antigua’s agriculture and lands minister.

He said crop stealing impacts 18 to 25 percent of agricultural land, and has obvious “de-motivating effects” on farmers. He and CARDI’s Chesney said ministers have come around to the belief that larceny is now part of “organised crime”.

“It is pretty organised and now a heavy burden on agriculture. We have seen farmers abandon lands because of the pain and heartache,” he said.

The question of the quality of food imported also made the rounds of ministerial caucuses and professional workshops. Baptiste said all should be concerned about hormone-laced meats and vegetables making it onto Caribbean dinner tables.

Such imports, he suggested, might well be responsible for “us seeing 10-year-old boys with breasts. The same is true with young girls. This is all because we are not producing enough of our own and have to spend so much money importing food that we can grow ourselves.”

In a sign of how badly agriculture has slipped as a regional priority, CARDI’s Ena Harvey said that the coconut industry is in such dire straits that “all of the massage oils used in the tourism industry (made from coconuts) are now imported from outside the region.”

For the original report go to http://ipsnews.net/news.asp?idnews=53448