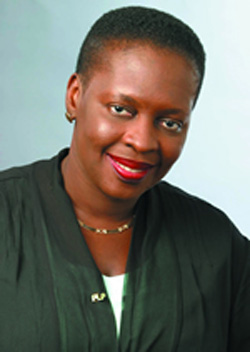 One of her female supporters said, said “I am very happy. I was a supporter of Paula; it’s time for the women to rule. I think it will be very interesting to see how she does. She was always in the shadows of Ewart Brown and could not really be herself. I think we will see the real Paula now.” Brown, 64, who was also Tourism and Transport Minister, was premier for four years and an MP since 1993 but is quitting politics altogether.

At the swearing-in ceremony, Cox declared that she would be revealing a “fierce and fearless” shaken-up Cabinet team on Monday, adding that she would be embarking on a mission to restore public confidence, reduce tax, and make savings while maintaining a treasury portfolio, in addition to her Premier duties. She also spoke of her long service to the Progressive Labour Party and dismissed suggestions she was receiving a “coronation” simply because of the legacy of her father, the late Finance Minister Eugene Cox.

Premier Paula Cox earned a Bachelor of Arts Degree in Political Science from McGill University, a post-graduate Diploma in International Law from the University of Manchester, England, and is a member of the Bermuda Bar, having trained in the United Kingdom as a Solicitor. She previously worked as Vice President and Senior Legal Counsel of Global Funds Services at The Bank of Bermuda, Limited. She has ample expertise in the field of international law and international business organization.

Among her many government positions, under the premiership of the Honourable Jennifer Smith, JP, MP, now Dame Jennifer Smith, Premier Paula Cox was appointed as the first PLP Minister of Labour, Home Affairs and Public Safety. She and her father, the late C. Eugene Cox, JP, MP, were unique as both were Ministers in the first PLP administration and the only serving father-daughter duo.

Premier Cox gained respect across party lines for her brilliance as an articulate young lawyer and administrator. While the Minister of Labour, Home Affairs and Public Safety, she was named in the Bermudians’ Best of Bermuda Gold annual listing as the most effective politician for 2001. She was appointed Minister of Education and Development on November 1, 2001.

Following the July 2003 General Election, Premier Cox was appointed as Attorney-General and Minister of Education. She served in this dual portfolio until January 2004. In 2003 she was again cited in the Bermudian’s Best of Gold’s annual listing as the most effective politician. This accolade was repeated in 2006 in her capacity as Minister of Finance.