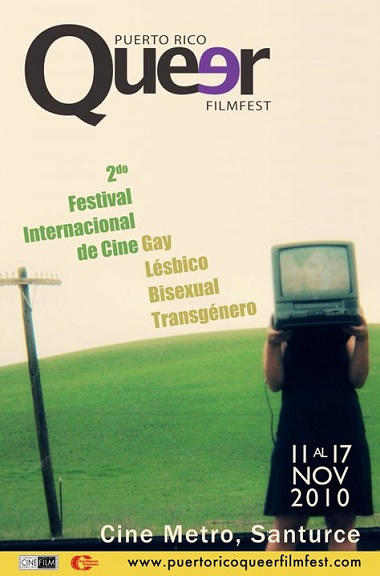 Cine Metro, in Santurce, Puerto Rico, will screen films from the 2nd Puerto Rico Queer Filmfest: Festival Internacional de Cine LGBT [International Festival of LGBT Film] to be held from November 11-17, 2010. The festival will showcase documentary, feature, and short films, and will hold lectures and panel discussions. Two main awards will be handed out: the Jury’s Choice and the Audience Favorite.

The Puerto Rico Queer Filmfest attempts to “showcase, promote, and celebrates diversity” while educating and presenting “quality films to a wide audience of film lovers” in accordance to the festival’s “mission to promote a more diverse, inclusive and fair society.”

The festival’s organizers write: “This Lesbian, Gay, Bisexual and Transgender (LGBT) themed film festival is a groundbreaking event, the first of its kind in Puerto Rico and the Caribbean. PRQF is a non-profit organization aiming at presenting audiences the diversity of queer culture through audiovisual media. By queer we refer to a broad spectrum of non-conventional categories. The queer voices in these films come from a variety of individuals, groups, and communities as they find means of expression in the artistic, social, and political realms. Our goal is to create a forum that promotes and stimulates a dialogue about queer culture. We feel that cinema is an ideal channel to bring into discussion ideas that question and challenge traditional values and notions.”