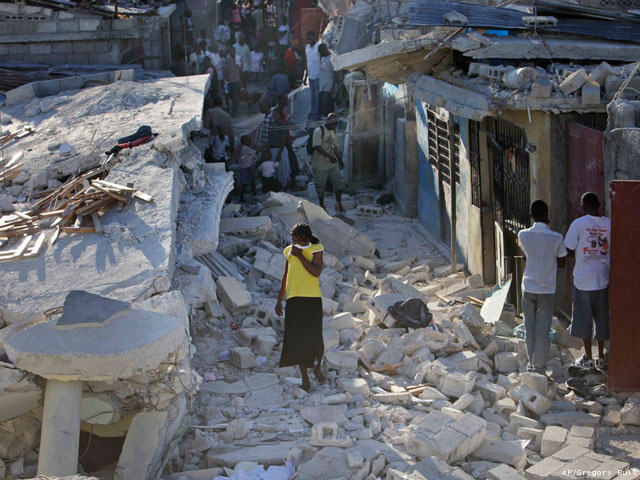 Curtis Morgan of the Miami Herald explains why the earthquake that left Haiti in ruins and killed more than 200,000 people may not have had been the ”big one” and almost certainly wasn’t the last one.

New studies published Sunday point to a previously unmapped ”blind” fault as the likely trigger for the catastrophe nine months ago and found no evidence it had eased more than two centuries of increasing seismic strain along the island’s major pressure point, which geologists call the Enriquillo-Plantain Garden fault zone. If anything, the studies conclude, Haiti now faces a heightened risk of repeat quakes along the Enriquillo fault — particularly near the heavily damaged, densely populated capital of Port-au-Prince. ”Even if this earthquake did not occur along the entire fault, it’s certainly an indication that stress has built up in the area,” said Andrew Freed, a Purdue University geophysicist and co-author of one of several papers published online in Nature Geoscience. ”It’s locked and loaded. My concern is that we are in the beginning of new cycles of earthquakes.”

What scientists stress they can’t pinpoint with any certainity is when or how frequently temblors might again shake the devastated country. Before the Jan. 12 quake, which measured 7.0 on the Richter scale, Haiti was last rocked by significant earthquakes in 1751 and 1770. But University of Miami earthquake expert Timothy Dixon, who co-authored another study in the journal, said the series of quakes in similar ”strike-slip” fault zones in places like Sumatra and Turkey strongly suggest it won’t take centuries for the next big quake.

Typically, he said, other large quakes follow within decades and at either end of the fault zone, where earlier quakes can increase tensions between massive, slow-moving tectonic plates. The sudden, violent shifts that finally relieve that strain are what generate the intense shaking of an earthquake. ”There is another shoe waiting to drop at one or both ends of the rupture zone,” said Dixon, a professor of geophysics at UM’s Rosenstiel School of Marine and Atmospheric Science. ”’We can’t say very much about when that other shoe will drop. It could be 100 years from now or it could be next month.”

The studies, published in a special edition of Nature Geoscience focused on the Jan. 12 quake, are among the first peer-reviewed research on the quake’s origins. The findings echo concerns many geologists had raised before and after the quake. They also underline the difficult rebuilding challenges that face Haiti, where aging, weakly re-enforced and poorly constructed buildings multipled the death toll and left 1.5 million people homeless and living in tents.

Hispaniola, the island Haiti shares with the Dominican Republic, sits atop two major faults — borders between the North American and Caribbean tectonic plates, which grind against each other as they move about one inch per year. The 200-plus years of pent-up strain in the Enriquillo fault, which runs from Jamaica east through southern Haiti and the capital city into the Dominican Republic’s Enriquillo Valley, has long been considered a trouble zone.

Dixon and colleagues authored a paper in 1998 warning of serious seismic instability in Haiti centered along the Enriquillo fault line. In 2008, Freed and Purdue colleague Eric Calais, a study co-author on leave in Port-au-Prince to serve as science advisor to the United Nations on Haiti’s recovery plans, produced another study predicting an impending 7.2 quake near Port-au-Prince.

That’s why geologists initially made the Enriquillo fault the prime suspect.

But months of field observations and measurements taken from global positioning systems, satellite images and radar-and-light ranging systems, found little change along the main fault line. For one thing, despite widespread structural damage, there were no major surface ruptures or sideways landscape shifts that are telltale signs of quakes in ”strike-slip” faults. The patterns of deformation instead pointed to a parallel, previously unknown fracture running along the coast, now dubbed the Leogane fault line.

Anthony Crone, a research geologist with the U.S. Geological Survey in Denver who co-wrote one of the studies, said it’s not unusual for an earthquake to reveal a ”blind,” meaning unknown, fault in boundaries between tectonic plates that can stretch for a hundred miles or more. ”There is a lot of squeezing and grinding and crunching going on,” he said. ”It’s not totally surprising that you are going to have much larger features in these very complex structures.”

Though confined underground, the seismic ruptures were powerful enough to raise coastal elevations along a 50-to 60-mile stretch west of Carrefour, Crone said. Researchers found small, near-shore corals that normally grow no higher than low tide levels suddenly exposed above the waves — in some spots thrust as much as two feet higher.

The consensus view is that Enriquillo fault remains — as Freed put it — ”locked and loaded” and a serious seismic hazard. The risk is particularly pronounced in sections east of the epicenter that are closest to Port-au-Prince, about miles to the south of the city. Dixon stressed that the studies amount to a preliminary investigation and it will take more research to definitely determing the origin of the quake. There is the possibility, for instance, that some strain may have eased in deep, unobservable sections of the Enriquillo. If there is a positive message from the work, he said, it’s that the country has time to prepare for the next one. ”You probably have a few decades to enforce your building codes and build stronger and better,” he said.

But, scientists cautioned, when the Enriquillo fault inevitably goes, it could generate far more force than the January quake. ”This was a small event,” said Freed. ”We are talking much larger. The historic earthquakes were 7.5 or 8, orders of magnitude more.”

Under the complex algorithm of the Richter scale, an 8.0 quake would produce 30 times the energy of a 7.0 quake. A 9.0 would generate 30 times that — meaning 900 times stronger than what Haiti endured.

Researchers stressed they were not being alarmist but simply reporting the hard facts of the country’s unstable seismology.

”Unless we’ve just really got it wrong about what has happened in the past,” Freed said, ”it’s not going to be two centuries until the next one, it’s going to be a matter of decades.”