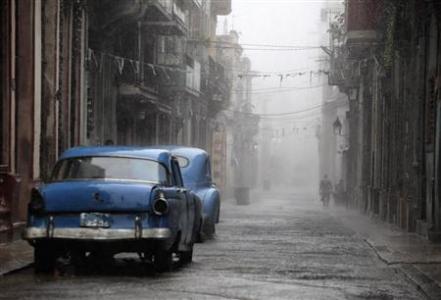 Tropical Storm Paula weakened further on Thursday, but still packed enough punch to blast through the Cuban capital with driving rains and high winds that toppled trees, flooded streets and left large swaths of the city without power, Reuters reports. There were no reports yet of building collapses that usually plague the crumbling capital in stormy weather. The U.S. National Hurricane Center said Paula’s top sustained winds had dropped to 55 miles per hour after it moved inland in northwestern Cuba and swept eastward.

The storm, located 25 miles east of Havana and loping along at 14 mph, would continue weakening and become a tropical depression on Friday, the Miami-based center said in its latest advisory. Paula, a small storm which had been downgraded from a hurricane earlier in the day, crept ashore in northwestern Cuba around noon and moved east across the Caribbean island, where it had been expected to peter out over mountainous terrain. But the worst of its weather stayed offshore in the Straits of Florida and a small portion dipped down into Havana to whip the city with wind and drenching rains as the eye passed just to the south.

The stormy weather, which lasted about two hours, caused minor flooding around the city and sent waves crashing over the Malecón, the city’s famous seaside boulevard. Toppled trees and power lines blocked streets in some areas. When night fell, much of Havana was in the dark due to widespread power outages.

Aurora, a resident of Central Havana, one of the city’s most decrepit areas, said she could hear windows breaking in the neighborhood’s old houses as the storm raged outside her home. Inside, she had to keep sweeping rain water out of her kitchen the wind had driven in through a loose window frame. The ferocity of the storm surprised her because weather forecasters had predicted Paula would be so weak by the time it got to Havana, it would be little more than a rainstorm. “I was expecting something a little less aggressive. I mean, people were out in the streets, nobody warned us,” she said.

Earlier, wind gusts up to 68 mph had been measured at the northwestern coast where Paula came ashore, the hurricane center said. Cuba reported its western tip had received 4.5 inches of rain in 24 hours.

Cuban state media said about 120 people were evacuated as a precaution from low-lying areas of westernmost province Pinar del Río, which along with other parts of Cuba was badly hit by destructive hurricanes in 2008. There were no immediate reports of serious flooding.

Pinar del Río is where the premium tobacco for Cuba’s world-famous cigars is grown, but local officials said tobacco fields had been protected and leaves from the previous harvest safely stored.

Paula, the 16th named storm and ninth hurricane of the busy 2010 Atlantic season, had not affected offshore oil-producing regions in the Gulf of Mexico.

For the original report go to http://www.reuters.com/article/idUSTRE69A4TD20101015