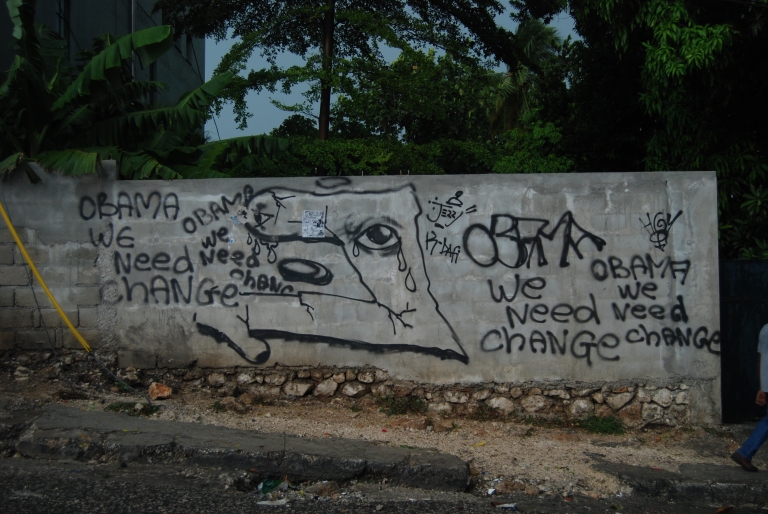 Ever since I returned from my visit to Port-au-Prince this summer, I have been meaning to write something about Haitian graffiti artist Jerry Rosembert, but something always interferes. Well, instead of writing, which is what I ought to be doing, I am posting a profile of Jerry that Pooja Bhatia published as an Op-Ed piece in The New York Times last April. It will stand in lieu of what I want to write about the impact his work had on me during my stay in the city and give me an excuse to post some photographs of his wonderfully soul-lifting work.

The image came to Jerry Rosembert as he and his father wandered the dust-clouded streets downtown, where they lived, toward the Champs de Mars.

In the hours after the earthquake struck on Jan. 12, thousands of his shocked countrymen had congregated in the giant plaza, weeping and crying out for Jesus. Jerry, a 25-year-old graffiti artist, knew what to do: with a can of spray paint, he turned a map of Haiti into a person who cried and held his hands skyward in prayer. Jerry didn’t sleep that night, and after dawn broke the next day, he sprayed five more crying Haitis in a neighborhood called Bois Verna. Soon after, the symbols appeared all over town.

For more than a year before the quake, Jerry had been spray-painting the city with strange, sharp images. His paintings stood out; until then, most Port-au-Prince graffiti shilled for politicians hardly anyone cared about. But Jerry believed that graffiti shouldn’t exist for writing “down with” or “vote for.”

On Avenue John Brown last year, he showed me a man turned upside down on a stone wall. “It’s called Tèt Anba,” Jerry told me, referring to a Creole idiom that means, literally, “head below.” It connotes something that’s topsy-turvy or absurdly mixed up. “Just like Haiti,” Jerry said. He laughed, but he wasn’t kidding.

On Avenue Christophe, he had depicted two men with raised forks who fought over a roast chicken and, a little farther down the street, a long line of patients who languished in front of an imperious receptionist, busy with her nails. One man spoke into his hand and bit a cement block, as though he had a cellphone and something to eat.

Near a corner where prostitutes plied their trade, Jerry painted a woman torn between a john and her child. A goggle-eyed man slipped a rope around his neck. All over town, faces of beautiful young women and old men simply wept.

Much of Jerry’s pre-quake work has survived, and these days it has an awful poignancy. In the camps, the homeless are indeed scrumming over food. In the hospitals, patients wait days to be seen. Young women are forced to trade sex for food or shelter. With no visible end to the crisis, some Haitians have surrendered their last asset: faith in the future.

The other day, a Haitian friend told Jerry that he was a prophet, that he must have sensed the hell that would befall his country. “Maybe I did,” Jerry said to me later. “But really, those things I painted — the suffering, the poverty, the misery — that all existed before the earthquake. Now things are just worse.”

Since that first painting of Haiti’s tears and prayers, he’s sprayed about 20 of them all over Port-au-Prince — the most recent a few nights ago — and the image has become iconic. Jerry admits that it’s not as witty or sophisticated as his pre-earthquake work, but perhaps that’s as it should be, he says. It might be too soon for cleverness. 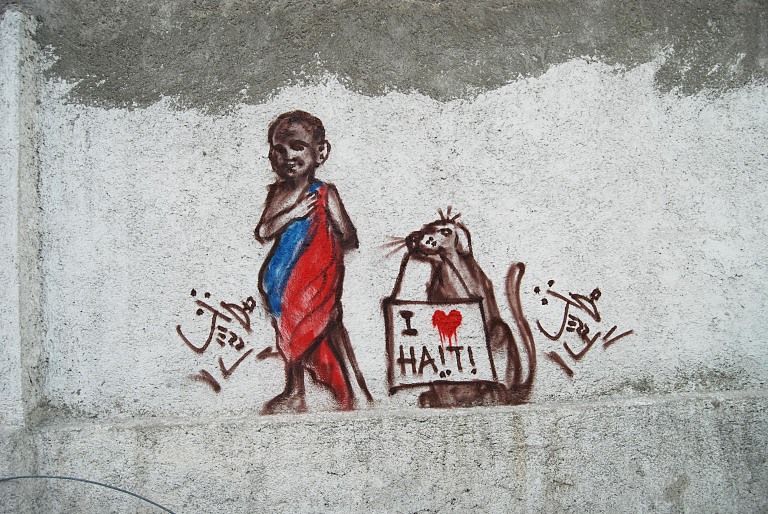