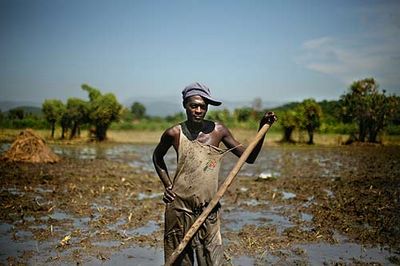 Agriculture in Haiti is coming back from the devastating earthquake but production levels remain well below what they were, the United Nations said Wednesday. The U.N. Food and Agriculture Organization said the spring rains arrived late, which also hurt farmers. Its assessments have found harvests of many key crops significantly below those in 2009.

But the production could have been even smaller, given the devastation wrought by the 7.0-magnitude quake that hit the Caribbean island nation in January, officials said.

“Levels of food production could have been much worse,” said Mario Zappacosta, an economist with the Global Information and Early Warning System on Food and Agriculture. “Timely provision of food assistance and agricultural inputs coupled with decent weather, have enabled farmers who were affected to start getting back on their feet.”

Haiti will need to import more than 700,000 tons of food by next June, the FAO estimates. More than 500,000 can be purchased on the open market but Haiti will still need substantial aid.