This week—sunny with clear skies in Puerto Rico—was perfect for Johnny Depp and Penelope Cruz for their shoot on Palominito islet, off the main island. Depp and Cruz had recently been filming in Old San Juan, especially at the spectacular San Cristobal Fort, scenes for Pirates of the Caribbean: On Stranger Tides. 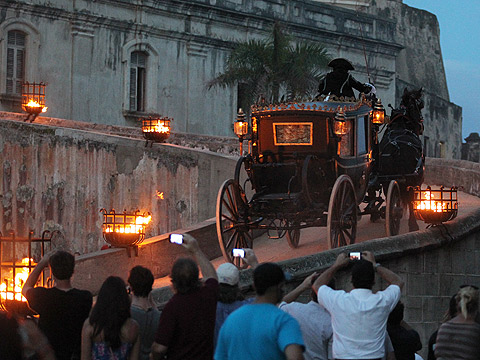 According to El Nuevo Dia, scenes so far have been filmed in Hawaii and Los Angeles. They have the grim aspect that distinguishes the preceding three parts of the series. These were mainly shot during the evening and night. But Palominito’s “turquoise blue, calm sea and bright sun will serve as the visual language to set the happy ending” where it is implied that Captain Jack Sparrow (Depp) will live with his old love, Angelica (Cruz), after having overcome many vicissitudes.

The actors were transported yesterday to the islet to shoot one of the four scenes to be filmed in Puerto Rico; more scenes were filmed yesterday. Security was strict at the hotel El Conquistador, Palomino, and Palominito. Even engineers that were involved in the filming had to stay in boats, so as not to appear in the scene or leave footprints in the sand, which had to be as pristine as possible.

One of the scenes filmed on Palominito shows Jack Sparrow taking Angelica to the shore on a wooden canoe. Apparently, the scene ends with a shot of a Vodoun doll floating on the ocean, an indication that there may be other films on the horizon for the Pirates of the Caribbean series. Today, the crew will fly back to London, where they will film at Pinewood Studios.