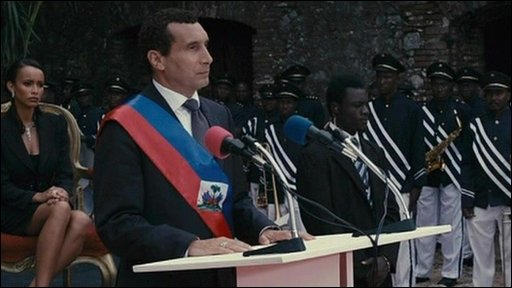 As part of the Part of the BAMcinématek series “Creatively Speaking,” Moloch Tropical, directed by Raoul Peck, will be screened on Friday, September 24, 2010. “Creatively Speaking,” curated by Michelle Materre and Neyda Martinez, presents films that speak to the wide-ranging experiences of people of color across the Diaspora. The film will play at BAM Rose Cinemas, located at 30 Lafayette Avenue in Brooklyn, New York.

The BAM describes Moloch Tropical thus: “Acclaimed filmmaker Raoul Peck transplants Aleksandr Sokurov’s Moloch (about the final days of Hitler and Eva Braun) to Haiti, to create a shattering portrait of a politician’s psychological and political breakdown. In a fortress perched on the top of a distant mountain, a democratically elected President and his closest collaborators prepare for a state celebration; meanwhile his country’s citizens express their dissent as the city is engulfed in flames and the streets erupt in turmoil. As the day goes on, the rebellion and mayhem worsens. The film is in French, English, and Creole with English titles. [Also see previous posts Raoul Peck: A different View of Haiti and Raoul Peck’s Moloch Tropical.]

In an interview at the Sydney Film Festival this summer, Peck discusses “the genesis of the film, his thoughts on the relationship between art and an audience, and using the absurd as a weapon when words have lost their meaning.” The Haitian director and former Minister of Culture of Haiti, speaks about his film and its historical grounding. Although it was inspired by Haiti, and was filmed there, Moloch questions “what democracy has become today” in many countries. Giving examples of world events in the past few years, he speaks about the complexities of power in social and political institutions, explaining that it could very well be set in Haiti, Italy, the United States, France, and many others. He says that, although it is about the last two days in a man’s presidency and about loss of power, it is also about human relationships, sex, the aphrodisiac aspect of power; it explores how rare it is for those who have power to have sufficient wisdom to resist its lure.

[Many thanks to Kevin Meehan for bringing this excellent interview to our attention.]

For more on the Bam screenings, see http://www.bam.org/view.aspx?pid=40