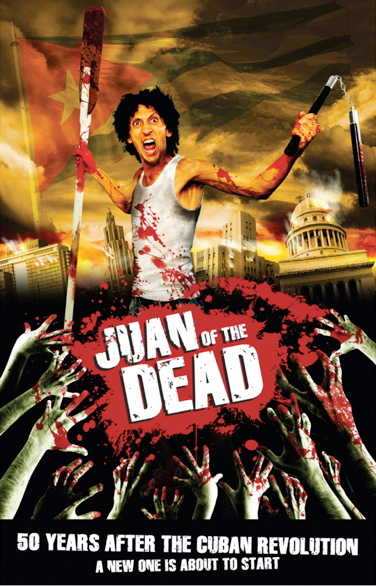 Dreadcentral.com recently announced: “The US had its Dawn. The UK had Shaun. Now Cuba has … Juan? Yes, you read that right, kids! The hottest import coming out of Cuba next to cigars will be a little zombie flick called Juan of the Dead. . .” Alejandro Brugués (Personal Belongings) is presently directing his new film Juan de los Muertos [Juan of the Dead]. [Also see previous post Cuba, Spain fight zombies.]

Ariadna Ruiz Almanza (Trabajadores.cu) explains: Havana begins to fill up with carnivorous zombies, suspected by some to be the result of a U.S. strategy. Struck by uncertainty, people begin to panic. Enter the hero of the story: Juan (Alexis Díaz de Villegas), who defends his profession as slacker at all costs. However, he decides that the best way to cope with the emergency is to prosper.  With his sidekick Lázaro (Jorge Molina), he offers to help people get rid of those infected around them for a small price, using the slogan “Juan of the dead, we kill your loved ones.” Ruiz adds, “Brugués himself assures us that, ‘in this Cuban zombie comedy, there will be fun for all,’ including our loved ones.”

Of Cuban descent, Alejandro Brugués was born in Buenos Aires, Argentina, in August 21, 1976. He studied advertising, psychology, and philology, and graduated with a concentration in screenwriting from the San Antonio de los Baños’ International School of Film and Television (EICTV), where he also attended a workshop taught by Colombian writer and Nobel Prize winner Gabriel García Márquez—“How to Tell a Story.”  He immediately began his career as a screenwriter, working on feature films Bailando chachachá, Tres veces dos (Lila), and Frutas en el café. In 2006, he took the leap to direct his first feature film Personal Belongings, which he also wrote. His films have been awarded prizes at numerous international festivals.

Source of illustration and brief article (in English), see http://www.dreadcentral.com/news/37499/cuba-needs-a-hero-enter-juan-dead