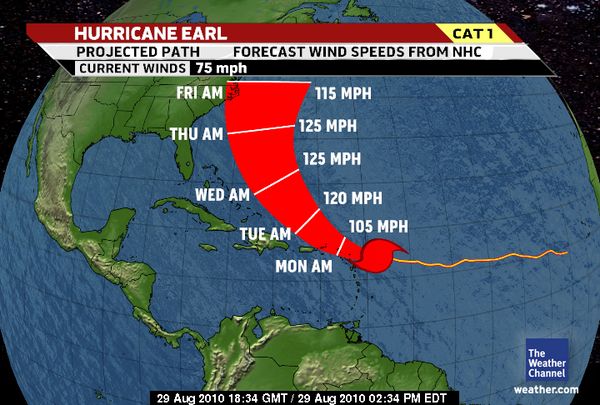 Hurricane Earl lashed the northeastern Caribbean with heavy rain and strong winds Monday, causing flooding in parts of the low-lying Leeward Islands and emptying the streets and beaches as people waited out the storm. The U.S. National Hurricane Center in Miami said Earl, which formed on Sunday, already had sustained winds of 110 mph (175 kph) and was likely to keep growing. National Hurricane Center forecasters project the hurricane to remain offshore of the United States, passing through the open water between the U.S. and Bermuda from Wednesday through Friday; however, just a slight westward shift of the storm track would mean that the powerful hurricane could directly affect the United States coastline.

As of this morning, Hurricane Earl was a strong Category 2 storm, with a sustained wind of 105 mph. It is forecast to peak as a dangerous Category 4 storm with a sustained wind of at least 135 mph Tuesday and Wednesday. When it reaches Category 3 with sustained wind at 111 mph, Earl will become the second major hurricane of the season. With the projected path, the greatest effect of the hurricane would be dangerous rip currents and rough seas along the Eastern Seaboard this week.
Hurricane Earl has already taken a track considerably farther to the west than its predecessor, Hurricane Danielle, the season’s first major hurricane, and the areas of greatest concern are eastern North Carolina and eastern New England, since those locations extend farthest east. A direct landfall is a risk for Atlantic Canada during Labor Day weekend.

5 thoughts on “Hurricane Earl strengthens in the northern Caribbean”