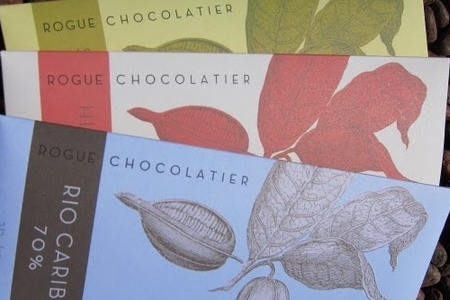 Ari Weinzweig, writing for The Atlantic, looks at how chocolate from the Dominican Republic fares as marketed by Rogue Chocolatier in Minneapolis.

This is probably totally the wrong time of year to be writing anything about chocolate. But as hot as it’s been outside, the truth is I’ve had Rogue chocolate bars in my mind all month and … when your mind is in Rome, run with it, right? Or maybe it’s Minneapolis. Chocolate making really is going off the mainstream stereotypical rails. France, New York, Switzerland, and San Francisco all at least sound like they “should” be capitals of chocolate making. But of late the energy seems to be flowing from the American Midwest—Askinosie and Patric in Missouri, and then Rogue in Minneapolis.
Which is fine with me. It’s nice to break up the stereotypes. On top of which, if I’m going to buck the business world norm and weigh in on a chocolate in the height of summer, it might as well be one called Rogue. You can look up a lot of stuff about Colin Gasko and Rogue Chocolatier online pretty easily. Long story shortish … Colin Gasko. Passionate. Focused. Quality-driven in the from-the-heart-and-head way we are (not the marketplace-is-looking-for-higher-quality kind of way). Young. Younger probably than Paul and I were when we opened the Deli, which, I think, is a good thing. No formal training. Out to do it his own way, which I also think is a good thing—some norms need to be busted—but also working hard to study the science and to watch every detail all the way through.

He’s also working, like Shawn Askinosie and a handful of other Americans are doing, all the way through from buying cacao beans at the source to making bars on site. The main things are that he’s working bean to bar, that he’s working in small batches, and that although everyone says they’re going after great flavor, he’s one of the minority that I think actually is delivering on it at a very high level that I, at least, really like. Just be because something is bean to bar doesn’t mean it necessarily tastes good, any more than “local,” “organic,” or “homemade” necessarily guarantee good flavor either.
While bean to bar chocolate making sounds rather simple and certainly fairly romantic, it’s actually way more work than most people—me included—can imagine. There are dozens of different steps that can impact the quality of the finished chocolate—type of bean, plant varietal, picking, fermenting, drying, roasting, grinding, conching, tempering. Let’s it put it this way: there are a thousand places to screw it up, and the truth is there aren’t actually all that many people doing it at a small scale. More power to Valrhona, but they’re probably producing in a couple of days what Colin is crafting in a year.
The reason I’m writing about Rogue is, as you’ll have guessed, because I think it tastes pretty darn good. Not perfect, I’m sure—who and what is? But out of all the chocolates I’ve tasted —I probably tried like 80 or 90 different bars in a recent four-week stretch—this is one of the ones that’s stuck with me most (in a good way). Eating the Rogue and talking to Colin reminds me that chocolate is really one of the rare things in the food world that probably wasn’t better a hundred years ago than it is now. While there was great cheese and great bread and great produce and great pastry in profusion prior to the 19th century, the same cannot be said for chocolate, at least not in the way that we know it. Cacao, of course, has long been cultivated. But mostly it was consumed in either very coarsely ground form mixed with sugar of some sort, or more likely brewed into a beverage. Even then the idea of a chocolate bar being readily available was pretty alien to all but the most affluent urban dwellers in Europe and North America.

The chocolate softens quickly on the tongue and the flavor spreads out nicely. Alive, well toned. In good shape. Not flabby or soft.

Anyways … the bars. Colin’s crafting three or four, but I’m particularly partial right now to the Hispaniola. Few folks know the name, but it’s actually the Caribbean island on which two modern-day nation states—Haiti to the west and the Dominican Republic to the east— currently coexist. The cacao for this bar comes from the latter, from a small, quality-focused co-op. The key, of course, is how the bar tastes. Very nice texture—a touch on the less creamy side of things I guess. Some folks won’t be all that excited about that, but, like I said, I actually like it a lot. It’s sort of a sturdier chocolate I think than many—kind of sleek, modern Scandinavian. Not soft and overtly sensual in tropical sort of way, but more like the lines of Danish modern design. How I’m getting that image out of a chocolate texture I have no real clue. But it came to mind and it makes sense to me, so I’m running with it.
The chocolate softens quickly on the tongue and the flavor spreads out nicely. Alive, well toned. In good shape. Not flabby or soft. Maybe this is what the hardscrabble roots of Scandinavian influence in Minnesota bring to bear on chocolate making? I don’t know, but I like it. The chocolate sits well with me. Resonant. Maybe a teeny bit almondy. I’m not really into negative description but I could tell quickly what it isn’t—it’s not cherry-dominated like the Madagascar chocolates, nor is it really buttery or creamy as many great French bars would be. On the positive side, it’s clean, delicious, a touch of tannin but not too much. Lively but not out of control. It has a bitterness I like.
I guess in truth I’m having a hard time with adjectives maybe because what this bar tastes like is . . . chocolate. There’s no vanilla, no dominant flavor characteristics, it’s not very sweet—it’s 70-percent cacao. Like all that Danish modern furniture I mentioned, mostly what you experience is the wood, its natural lines and style brought to the fore by the furniture maker. Pure and exceptionally simple really. (BTW, it seems like a good chocolate for coffee actually.)
For the original report go to http://www.theatlantic.com/food/archive/2010/08/the-artisanal-rogue-in-the-chocolate-section/62064/