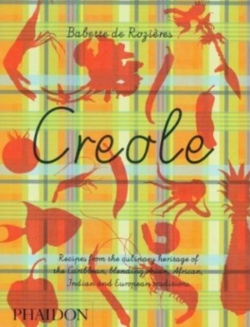 ​In the cookbook world, there are the $22.95-and-under whimsical buys, and then there are the long term investment cookbooks. Books like Babette de Rozières’ Creole, that don’t simply offer recipes, but a glimpse into the mind of a chef and a comprehensive overview of a cuisine. Books with inspiring recipes that perhaps you whip up, or that you might simply use as inspiration. And then you see that $40+ price tag. Too bad cookbooks aren’t like novels, with a paperback sequel soon to follow so we could all afford a shelf full of Adrias and Kellers.

Occasionally, even hungry cookbook connoisseurs get lucky. Phaidon recently released de Rozières’ 2007 classic in paperback, which means that for $29.95 (or substantially less from a certain online book giant), you can flip through recipes for banana flowers stuffed with seafood, rabbit in cocoa powder-laced mustard sauce, and savory plantain-Gruyère cheese casserole. With plenty of pennies to spare to make for an idyllic marriage of classic French cooking, coastal ingredients, and Caribbean flair.

​In paperback form, you’ll find the same refreshingly straightforward but comprehensive cookbook as the hardcover version, with more than 160 full-page recipes and art gallery-worthy photos of the food. Even the introduction by de Rozières, who grew up in Guadeloupe, a French Caribbean island, and owns La Table de Babette, a creole restaurant in Paris, is straight to the point. “Today I cook just as my grandmother taught me,” she says, and with little additional fanfare, moves on to a slide show photo lesson of West Indies fish and shellfish — everything from your standard octopus to rock beauty angelfish, something over here you’re more likely to see in a saltwater aquarium than on the plate.

The recipes also get down to business, with thorough (enough) instructions for those who are comfortable with seasoning dishes to taste. For instance, “a grating of fresh ginger,” rather than a teaspoon amount, is given on the recipe for chicken drumsticks with bélangére, a local purple and white streaked eggplant, in a Colombo curry sauce (Colombo is a Caribbean spice mix made of garlic, red chile, turmeric, cilantro, mustard seeds). Nor does the book include recipe headers offering substitution suggestions should you not happen to live near a Caribbean farmer, so if you’re the type to write the author to ask whether you can use any of the eggplant varieties available at L.A. area markets right now rather than bélangére (“sure, why not?”), you’re probably better off skipping Creole.

Meanwhile, the rest of us will be flipping through the “Vegetables, or Fruit?” section, an appropriate name for sweet-leaning Creole side dishes like yam croquettes and green mango souskai (a salsa-like condiment made of green mangos, garlic, cilantro and diced chiles). And baking the sweet potato “slice” (essentially a Napoleon filled with spiced mashed sweet potatoes rather than pastry cream), chayote tarte tartin, and making this coconut jam.

Coconut Jam
From: Babette de Rozières’ Creole cookbook.
Makes: Six small jars.
Note: If you’re not comfortable with canning, you may want to read these detailed instructions, or just cut the recipe in half and use the jam within one week.

1. Break open the coconuts and grate the flesh.

2. Pour 1 cup of water into a saucepan, add the sugar and the cinnamon stick and bring to a boil. When the sugar has completely dissolved, add the grated coconut and lime zest, then cook over low heat, stirring constantly, for 20 to 25 minutes, until the flesh becomes transparent.

3. Fill 6 small jars with airtight lids with jam. Seal tightly then cool by placing in a bowl of cold water. Once cooled, store jars in the refrigerator or in a cool cupboard; refrigerate after opening.

For more go to http://blogs.laweekly.com/squidink/cookbook-review/creole-cookbook-new-babette/