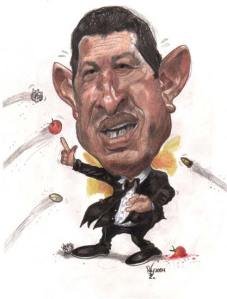 But I can testify from personal experience that they may well be an understatement.

In the early hours of July 16, just at the midnight hour, to be precise, Venezuela’s capo officiated at a grisly ceremony. This involved the exhumation of the mortal remains of Simon Bolivar, leader of Latin America’s rebellion against Spain, who died in 1830. According to a vividly written article by Thor Halvorssen in the Washington Post, the skeleton was picked apart even as Chavez tweeted the proceedings for his audience, and some teeth and bone fragments were taken away for testing. The residual pieces were placed in a coffin stamped with the Chavez government’s seal. In one of the rather free-associating speeches for which he has become celebrated, Chavez appealed to Jesus Christ to restage the raising of Lazarus and reanimate Bolivar’s constituent parts.

He went on: “I had some doubts, but after seeing his remains, my heart said, ‘Yes, it is me’. Father, is that you, or who are you? The answer: ‘It is me, but I awaken every hundred years when the people awaken’.”

As if “channelling” this none-too-subtle identification of Chavez with the national hero, Venezuelan television ran images of Bolivar, followed by footage of the remains, and then pictures of the boss. The national anthem provided the soundtrack. Not since North Korean media declared Kim Jong-il to be Kim Il-sung’s reincarnation has there been such a blatant attempt to create a necrocracy, or perhaps mausolocracy, in which a living claimant assumes the fleshly mantle of the departed.

Bolivar’s cadaver is like any other cadaver, but his legacy is a great deal more worth stealing than that of Kim Il-sung. Gabriel Garcia Marquez’s novel The General in His Labyrinth is one place to begin, if you want to understand the combination of heroic and tragic qualities that keep Bolivar’s memory alive to this day. The idea of a United States of South America will always be a tenuous dream, but in his bloody struggle for its realisation, Bolivar cut a considerable figure, as he did in his other rumoured capacities as double-dealer, war criminal and serial fornicator, also lovingly portrayed by Marquez.

In 2008, I went to Venezuela as a guest of Sean Penn, whose friendship with Chavez is warm. The third member of our party was the excellent historian Douglas Brinkley. The boss loves to talk and has clocked up speeches of Castro-like length. Bolivar is the theme of which he never tires. His early uniformed movement of mutineers which failed to bring off a military coup in 1992 was named for Bolivar. Turning belatedly but successfully to electoral politics, he called his followers the Bolivarian Movement. the country’s official name is now the Bolivarian Republic of Venezuela. At cabinet meetings, he has been known to leave an empty chair, in case the shade of Bolivar might choose to attend.

It did not take long for this hero-obsession to disclose itself in bizarre forms. One evening, as we were jetting through the skies, Brinkley mildly asked whether Chavez’s large purchases of Russian warships might not be interpreted by Washington as a violation of the Monroe Doctrine. The boss’s response was impressively immediate. He did not know for sure, he said, but he very much hoped so. “The US was born with an imperialist impulse. There has been a long confrontation between Monroe and Bolivar. It is necessary that the Monroe Doctrine be broken.”

As his tirade against evil America mounted, Penn broke in to say that surely Chavez would be happy to see the arrest of Osama bin Laden. I was hugely impressed by the way that the boss scorned this overture. He essentially doubted the existence of al-Qa’ida, let alone reports of its attacks on the enemy to the north. “I don’t know anything about Osama bin Laden that doesn’t come to me through the filter of the West and its propaganda.”

To this, Penn replied that surely bin Laden had provided quite a number of his very own broadcasts and videos. All of this so-called evidence, too, was a mere product of imperialist television. After all, “there is film of the Americans landing on the moon”, he scoffed. “Does that mean the moon shot really happened? In the film, the Yankee flag is flying straight out. So, is there wind on the moon?”

Chavez, in other words, is very close to the climactic moment when he will announce that he is a poached egg and that he requires a very large piece of buttered toast so that he can lie down and take a soothing nap. Even his macabre foraging in Bolivar’s coffin was initially prompted by his theory that an autopsy would prove that the Liberator had been poisoned, most probably by dastardly Colombians.

Many people laughed when Chavez appeared at the UN in 2006 and declared that he smelled sulfur from the devil because of the presence of George W. Bush. But the evidence is that he does have a weakness for spells and incantations, as well as many of the symptoms of paranoia and megalomania.

After the failure of Bolivar’s attempted Gran Colombia federation which briefly united Venezuela, Colombia, Ecuador and other nations, the US minister in Bogota, future president William Henry Harrison, said of him that “(u)nder the mask of patriotism and attachment to liberty, he has really been preparing the means of investing himself with arbitrary power”. The first time was tragedy; this time is also tragedy but mixed with a strong element of farce.

For the original report go to http://www.theaustralian.com.au/news/world/chavez-hurtling-towards-insanity/story-e6frg6so-1225902716203