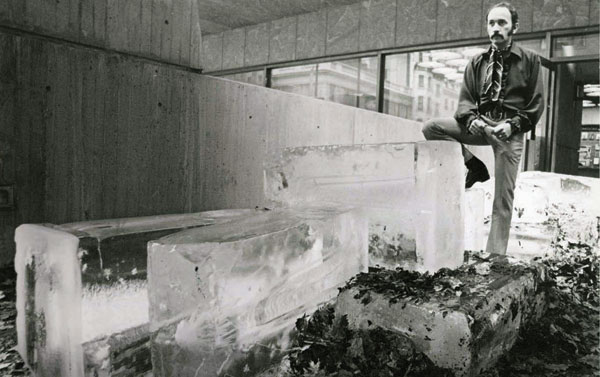 In the 1960s, Puerto Rican-American artist Rafael Ferrer thrust himself into international fame, when he began staging guerilla art actions in New York City and Philadelphia—creating a melting ice sculpture in the Museum of Modern Art, stuffing leaves into the elevators and stairwells of prominent art galleries, and smearing hay and grease over the walls of the Whitney Museum of American Art. Since then, he has become known for his sculptures and paintings. Much of this work is on display until August 22, at an El Museo del Barrio exhibit entitled “Retro/Active: The Work of Rafael Ferrer.”

“Ferrer understands himself as an artist in active dialogue with the world, including the history and continued trajectory of art,” reads a placard on one wall of the exhibit.

Born in 1933, Ferrer spent time in both Puerto Rico and the U.S.—at the University of Puerto Rico, at Syracuse University, in New York, and in Philadelphia . Though once labeled a primitive artist – one unaware of art outside his own culture — he has lived and created art in Paris, Holland, Germany, and Spain.

His work reflects these places, as well as the inspiration he took from European Surrealists and Cubists. But his most powerful paintings and sculptures are his vivid depictions of Puerto Rico in the aftermath of Spanish colonial rule.

“Retro/Active” focuses mostly on Ferrer’s paintings, but several of his sculptures are also included in the exhibit, which opts for a thematic, rather than chronological, arrangement.

In one of the exhibit’s most stunning paintings, an oil-on-canvas created in 1989 and titled “El Rio Balata (in the mountains, there you feel free -T.S. Eliot),” lush greenery and towering trees dance across the canvas, with a brilliantly colored sky matching the brilliantly colorful people beneath it. In “Conquista de la Soledad,” another oil-on-canvas painted in 1989, four human figures seem to almost blend in with the browns, yellows, and greens of their surroundings.

One of the most impressive sculptures in the exhibit is a sailboat-like structure about seven feet tall that hangs suspended from the ceiling and is composed of canvas, oil, acrylic, steel, wood, rope, beads, and coins. A bright blue bench hangs at the bottom, subliminally inviting the viewer to sit. The sculpture, built in 1975, is called “Yo, Yo, Yo, Yo, Yo,” or “I, I, I, I, I.”

Since he was a teenager, Ferrer has played percussion for various musical groups in both the U.S. mainland and Puerto Rico. Although in recent years he has oriented himself more toward visual art than to music, it is clear, especially in paintings such as “El Club” (1981) and “Merengue en Boca Chica” (1983), that Afro-Caribbean music has greatly influenced his work.

Some of Ferrer’s later pieces seem more explicitly political than his earlier ones. A 2008 collage, called “Do Not Call It Fixity” (another reference to T.S. Eliot), includes the word “WHY” upside down near the top and what looks like a plane falling from the sky toward a landscape of skyscrapers. At the bottom are the words “How many are right? How many are left?”

The exhibit opens with paintings by the three artists who most influenced Ferrer—Francisco Manuel Oller Cestero, a Puerto Rican who was involved in the development of Impressionism; Wilfredo Lam, a Cuban who spent time in Spain and France and sought to incorporate Afro-Cuban iconography into Surrealist and Cubist styles; and Eugenio Granell, a Spanish Surrealist painter who was exiled from Spain and the Dominican Republic for his leftist political activities.

“Retro/Active” is part of El Museo del Barrio’s FOCOS series, which is meant to highlight the achievements of under-recognized artists. El Museo was founded forty years ago, in the midst of the Civil Rights Movement, to promote and preserve the art of Puerto Ricans and Latinos in the United States.

For the original review go to http://www.citylimits.org/news/articles/4136/el-museo-del-barrio-exhibits-60s-guerilla-artist