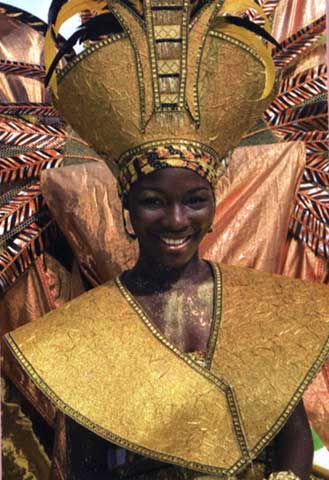 This weekend marks the climactic events of the Saint Lucia’s Carnival celebrations on the island.  Celebrating under the theme “Nothing Sweeter than Dat,” the carnival is being documented by two media teams from Martinique and Great Britain.

On Friday, five journalists from The Birmingham Mail, The Essex Chronicle, RWD Magazine, Soca News and Time Out magazine, arrived on island to begin coverage of various carnival events, including the Calypso Finals held today, July 17, the Caribbean Soca Monarch on Sunday, July 18, J’ouvert Jump-up on Monday July 19, and the two-day street parade of costume bands which culminates on Tuesday, July 20, 2010. The journalists, some of whom will actually participate in the street parade with the Royalties Extreme Carnival band, will travel with almost a dozen influential travel agents who will freshen their product knowledge of Saint Lucia during their stay.

Saint Lucia also welcomes the return of Martinique’s national radio and television station, RFO (Radio-Télévision Française d’ Outre-Mer) who began their coverage of Carnival at the start of the season last month. The RFO team is working on an hour-long documentary on the street parade and two other half-hour shows. Their coverage will trace their departure from Fort-de-France onboard the vessel L’Express Des Iles to their arrival at Port Castries, their interaction with Cultural Development Foundation officials and their actual participation in the Carnival jump-up on Monday and Tuesday.

For more information on the carnival events, see http://luciancarnival.com/