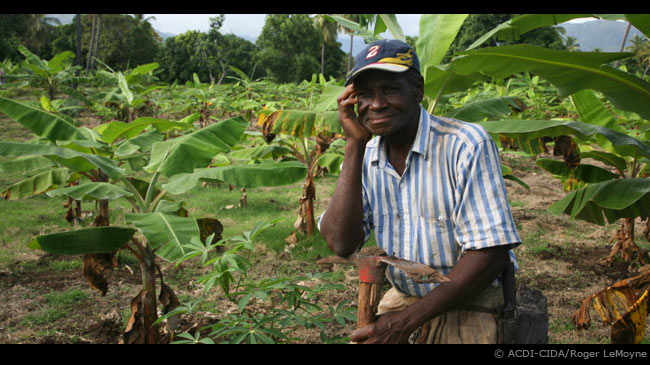 In Haiti’s rocky northern hills, Joseph Jean has planted seeds donated by a US aid group Trees for The Future hoping to reverse the deforestation that has washed away soil and impoverished farmers. Jean’s field barely feeds his family and he has had to take a teaching job to make ends meet. Some aid does reach often forgotten rural communities, far from the capital of Port-au-Prince, but Haitian farmers need more, he argued.

He pointed to a broken pipe that runs next to his house. Built under the 1971-1986 regime of ‘Baby Doc’ Duvalier, it has been dry for years. “This morning I walked up the mountain to get water,” said Jean, 38, who makes the trip almost daily, accompanied by two young daughters. “It’s three hours each way.” Many Haitian farmers share his concerns that the aid that does reach them may be inappropriate for this Caribbean nation or even harmful.

In June thousands protested against a four-million-dollar seed donation by giant multinational Monsanto which sparked debate over the quake-hit nation’s aid policies and agricultural future. It highlighted the bitter divisions among all sides involved in Haiti’s rural development and the battle to feed the swelling ranks of hungry, estimated by the International Fund for Agricultural Development to be around three million people or almost a third of the population.

Haiti was already the most impoverished nation in the Americas before the January 12 earthquake, and six months on the needs of destitute and the poor have grown only more acute. “Food security doesn’t mean that you have to produce it all, it means that when you go to the market you have the money to afford it,” USAID’s Christopher Abrams told AFP. Abrams explained that while WINNER, a 126-million-dollar USAID program that is also distributing Monsanto’s donation, respects traditional farming, its priority is to increase productivity and “double” profits. “The goal is not self-sufficiency,” Abrams said. “We want to help increase the income of farmers and non-farmers so they will be able to buy food.”

But that approach is controversial. “Programs like WINNER make peasants leave traditional farming for conventional and industrial farming, but that’s not what we want,” said Jean Baptiste Chavannes, speaking for the National Peasant Movement of Papaye Congress (MPNKP). The network of peasant associations has over 300,000 members, and Chavannes who declined offers to serve as agriculture minister and prime minister argued development will not come through food security but food sovereignty. “Peoples have a right to choose their agricultural policy, what to farm and how to farm it, or they will always be dependent,” he said.

Louis-Marie Laventure, an education supervisor with the Agriculture Ministry, said the Monsanto donation was much debated among authorities. But offer was accepted because it prioritises food security for the 77 percent of Haitians living in poverty, he said. The government also wants to give local production an opportunity to grow and repeatedly asked relief agencies not to import food already produced in Haiti, fearing this would deepen the country’s dependency on aid handouts.

Haiti imports 48 percent of its consumption, according to the World Food Program.

“Haiti had a food security policy for the last 20 years and look where it got them,” said David Millet, a French agronomist who volunteered in Haiti’s rural areas for two years.

“Aid agencies come with no connection to the fields, with their assumptions of what’s needed and without asking the locals,” Millet charged.

Haiti’s problem is not so much a scarcity of seeds, he said, as a lack of access, education on agricultural techniques, and infrastructure, including irrigation. In the countryside around central Hinche, Joachim Accene showed off a small artificial lake created by a farmers association to irrigate nearby fields, cultivated with mangoes and vegetables. Though the United Nations recently sponsored 10,000 dollars of repairs to the lake’s edge, the pipes running into the fields also need expensive maintenance. “Farmers can’t afford that,” Accene said, adding that simple cisterns and smaller lakes would solve many of their water problems.

At the Technical School for Development in Hinche, founded in 1985 with a World Bank loan, director Serge Durosier agreed.

For the original report go to http://www.thenews.com.pk/daily_detail.asp?id=250083