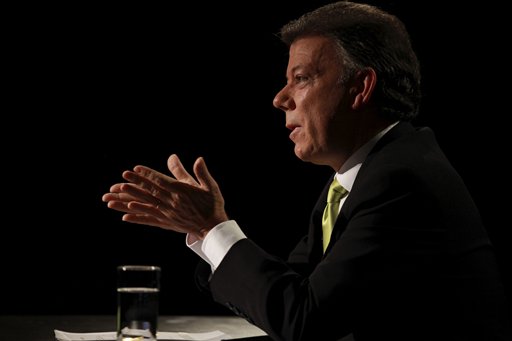 Juan Manuel Santos, a former defense and finance minister, swept to victory in Colombia’s run-off election on Sunday to succeed President Alvaro Uribe as the leader of Washington’s top ally in Latin America. Santos vowed to maintain Uribe’s security and pro-business policies, which have drawn in record levels of foreign investment and helped weaken the region’s oldest rebel insurgency. Now safer, Colombia is enjoying an oil and mining boom despite lingering violence from its cocaine-fueled conflict. Santos, backed by conservative Uribe, won 69 percent of the votes against former Bogotá Mayor Antanas Mockus, who trailed with 27.5 percent after almost all polling stations reported results from Sunday’s run-off election, officials said.

A U.S. and British-trained economist, Santos received more than 9 million votes — a record for a Colombian president — and will take office in August with a strong mandate and solid support in the Congress. “Colombia expects so much from us and we are not going to let them down,” Santos, 58, told cheering crowds in a Bogota hall decked with the white banners of Uribe’s U Party. “This is your victory too, President Uribe.”

Uribe is still popular after two terms during which he weakened left-wing FARC rebels and disarmed outlawed paramilitaries who once battled, bombed and kidnapped across Latin America’s No. 4 oil producer. In a sharp reminder of the conflict still facing Santos, seven police officers were killed in a land mine blast near the Venezuelan border on election day and troops killed six guerrillas in clashes in a central region. “The time is up for the FARC,” Santos said. “We will keep fighting against the enemies of the state.” Santos, who helped Colombia over a fiscal crisis in the 1990s, must tackle double-digit unemployment, a stubborn deficit and a costly public health system as the economy recovers from the effects of the recent global downturn.

Tensions with Venezuelan President Hugo Chávez, who has cut trade in a dispute weighing on Colombia’s economy, will also simmer on under Santos. The two men — who Santos says are “oil and water” — have clashed repeatedly. “Santos will be challenged to manage the difficult relationship with neighboring Venezuela at the commercial and diplomatic level and to deliver solid and inclusive growth and job creation,” said Goldman Sachs analyst Alberto Ramos.

Santos, a former newspaper editor who began his public career in his 20s, won an election on May 30 but fell just short of the 50 percent plus one vote needed to avoid a run-off. The head of Uribe’s large U Party, Santos won the support of the Conservative and Cambio Radical parties after the first round and part of the opposition Liberal Party. Mockus’ small Green Party had challenged traditional parties with a call for cleaner government but he was unable to stop Santos, who was closely identified with Uribe. “The Green Party will be an independent force,” Mockus said, accepting defeat at his campaign headquarters. “There are millions of us who have found a new way to do politics.”

Since Uribe came to power in 2002, violence has dropped sharply thanks to billions of dollars in aid from Washington to fight guerrillas and drug barons. But Uribe’s second four-year term was marred by scandals over corruption and rights abuses, including arrests of lawmakers for colluding with death squads and a probe into state spies illegally wiretapping journalists and judges. Santos, son of one of Bogota’s elite families who is meticulous about his appearance and quotes former U.S. President Franklin Roosevelt, distanced himself from the scandals, portraying himself as an experienced technocrat.

As defense minister, he oversaw some of the sharpest blows to the guerrillas. Santos also ordered a successful rescue operation to free prominent hostages, including a former presidential candidate and three U.S. contractors. But his tenure was tainted by charges that troops killed civilians to artificially boost combat tolls. The scandal cost the army chief and 27 officers their posts but Santos said he worked to halt the so-called “false positive” killings.

For the original Reuters report go to http://ca.reuters.com/article/topNews/idCATRE65J0A620100621?sp=true