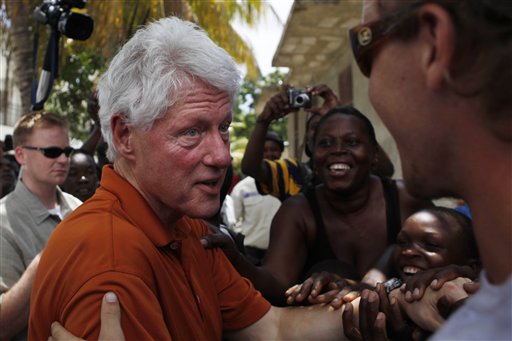 Jacqueline Charles of the Miami Herald writes about Bill Clinton’s visit to one of the worst-hit cities from January’s Haiti earthquake to discuss preparations for the hurricane season.

Former President Bill Clinton arrived in Haiti’s most earthquake-ravaged city Tuesday looking for answers: What would it take to be prepared for hurricane season and what do Haitians need to get out from under tents?“You don’t have to have hurricane-force winds to blow down tarps,” he said before meeting with nearly two dozen aid representatives and three local camp leaders in Léogne.

Clinton said he wasn’t happy with the progress so far but was pleased with efforts to provide temporary shelter.

But along with hearing about the fears of Léogne’s 200,000 residents, most of whom were displaced after the Jan. 12 quake destroyed more than 80 percent of the city, he also got a look at the challenges of getting quake victims to leave the camps.

The tour revealed a lack of coordination by aid groups, conflicts between landowners and quake victims, no clear government directives, and a population increasingly dependent on foreign aid since the quake took a government-estimated 300,000 lives in the country.

“Since the 12th of January, misery has been killing us,” screamed Madame Orilus Menard as Clinton passed her.

Clinton announced in Léogne, a pledge from his foundation of $2 million, consisting of $1 million for disaster preparedness and hurricane safety and another $1 million for the Interim Haiti Reconstruction Commission (IHRC) that is working to spend more than $5 billion in foreign aid. The Haitian government is also providing $1 million for the commission, which held its first meeting Tuesday night in the Dominican Republic.

Some of the Clinton Foundation money will be used to build and improve emergency shelters in at-risk areas.

Haitian Prime Minister Jean-Max Bellerive said the immediate priority for the commission was “taking the people out of the risks. We can’t think of anything else.”

Clinton also made a plea to Haitian landowners, saying he hoped they would allow displaced tenants to remain on their property at least through hurricane season.

“We have a serious land property problem in Haiti,” Clinton said.

Many property owners have refused to let tenants back into their homes although many had paid six months’ to a year’s rent before the quake.

Bellerive says a solution for the land issue is being expedited.

“It’s very complicated because you have to respect the property of the people,” he said.

But he conceded that it’s a question of political will, as well as commitment by all involved that once land has been allocated, individuals will be relocated there.

“I don’t want to take the land of somebody and do not provide anything,” Bellerivesaid during the community meeting.

And the issue is not limited to land. He said aid groups must commit to relocating people once the land is provided.

One thought on “Bill Clinton seeks hurricane-preparedness answers in Haiti”