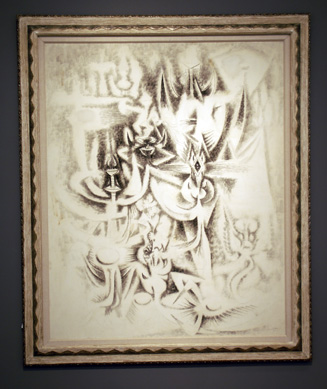 Lam painted “Sur Les Traces” after he returned to Cuba from Paris, where he belonged to the surrealist group led by André Breton. “This work combines European elements of surrealism and of santería,” said Melián. Like Haiti’s voodoo, santería mixes Roman Catholicism and West African religious traditions. Lam’s grandmother was a santería priestess, she added. Horsetails, horns and flames evoke santería in a dreamlike setting where fluid black strokes trace silhouettes of human extremities like eyes and fingers.

At $722,500, the second-best seller was “The Ordeal of Orwain,” by Mexican surrealist Leonora Carrington. The 1959 painting portrays a Druid-like sacrifice of a legendary Welsh noble; a priestess with a cat-like face stirs a caldron. A 1951 untitled work by Chilean surrealist Matta was another top seller at $692,500.

Mexican Diego Rivera’s “Portrait of Gladys March” went to a North American private collector for $662,500. March was an American journalist who spent six months interviewing Rivera and the ghost writer of his autobiography. Rivera’s 1953 “Tejedora y los Niños,” or “Weaver and Children,” valued at up to $1.3 million, failed to sell.

The original article appeared at http://www.todayszaman.com/tz-web/news-211552-110-cuban-surrealistlam-tops-latinamerican-art-sale.html