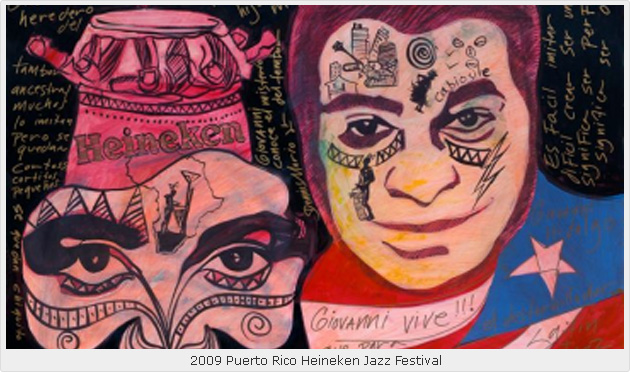 Celebrating its 20th edition, the four-day musical fete – to take place June 3-6 at the Tito Puente Amphitheater in Hato Rey – will unite a who’s who list of jazz and Latin jazz stars, including Paquito D’ Rivera, Michel Camilo, Chick Corea, Eddie Gómez, Miguel Zenón, Eddie Palmieri, Dave Valentín, Giovanni Hidalgo, Alex Acuña, Gato Barbieri and Andy González, among others. Kicking off the festival at 8 p.m. will be the Humberto Ramírez’ Jazz Project, followed by the Paquito D’ Rivera Septet, starting at 9:30 p.m.
On Friday, the musical extravaganza continues at 8 p.m. with William Cepeda’s Ethno-Jazz Project, featuring Millo Torres and Enrique Cárdenas, among others, followed by George Wein & the Newport All-Stars, beginning at 9:30 p.m. Also sharing the stage on Friday will be internationally renowned Dominican pianist Michel Camilo and his trio, who’ll close the night starting at 11 p.m.
The festival continues on Saturday with Giovanni Tommaso Apogeo at 8 p.m., and Puerto Rican jazz saxophonist Miguel Zenón, who’ll be accompanied by Henry Cole on drums, Héctor “Tito” Matos on lead vocals and percussion and Luis Perdomo on piano. Rounding out the night’s entertainment will be jazz great Chick Corea, who’ll play with Puerto Rican bassist Eddie Gómez.
As it has become a tradition, the last day of the event will showcase the Berklee in Puerto Rico Student Band at 5 p.m, followed by the Puerto Rico Heineken JazzFest Big Band, featuring a powerhouse roster of A-list jazz figures, including D’Rivera, Camilo, Corea, Gómez, Zenón, Palmieri, Valentín, Hidalgo, Acuña and González.
Though it’s not confirmed yet, there’s a big chance that Cuban pianist Jesús “Chucho” Valdés might join the star-studded lineup. As part of the PRHJF 20th anniversary celebrations, there are plans for a 40-piece photo exhibit of the festival that will be put on display at a yet undisclosed museum in San Juan. The date of the opening is yet to be announced.

The Heineken Jazz Festival is still one of the leading festivals to take place in Puerto Rico. Its vibrant zeal has surpassed all expectations and is now regarded highly as the premier event to see in the Caribbean. The Festival has been running for over twenty years. Through the test of time the festival has matured and had gained regional and international attention with its amazing and diverse performances by both international and local musicians and artists alike.

Each year the Heineken Jazz Festival in Puerto Rico hosts a variety of beautiful venues contributing greatly to the lavish atmosphere enjoyed by the excited supporters each year. During years past audiences at the week-long Jazz Festival event have become familiar with such formidable Jazz artists such as George Benson, Ray Vega Latin jazz sextet, Roberto Perera, Julito Alvarado Del Sur al Norte and Strunz and Farah, as just a few welcoming names.

The main genres of music emphasized are the Puerto Rican music styles and Latin Jazz. The development of the festival has been overwhelming and becomes increasingly impressive as you review its past history and consider where the growth in the event may lead to its further success in the future. Audiences feel privileged to attend this auspicious event and any Jazz fan must put this venue as a “must see”. The Jazz Festival has grown in popularity over the years and has reached audiences in North American and Europe as well as the Caribbean.

The festival showcases up-and-coming Jazz performers as the exposure to the public surpasses at this event rivals any form of advertising and often leads to bands getting their music heard by new audiences. Performers also gain experience performing before live audiences which is invaluable to any performer. However for most of the performers, the ultimate reward is receiving a Jazz Scholarship.

Through the popularity of the Puerto Rico Heineken Jazz Festival renovations have been made to the performance venue. One of the greatest improvements, though, has been the awakening of Puerto Rican non-mainstream musical crafts. Many other cultural benefits have been seen and met with success through the support of those sponsoring and participating in the festival.

For more information and tickets go to www.prheinekenjazz.com/