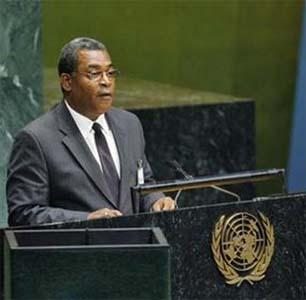 Haitian Prime Minister Jean Max Bellerive said in an interview with the Spanish news agency Efe that American missionary Laura Silsby’s case was one of “child trafficking” despite the fact that a judge had ordered her released. “The truth is the truth and the judicial proceedings are something else,” Bellerive told Efe after participating in the European Union-Latin America-Caribbean Summit in Madrid. The prime minister said that if the judicial proceedings were not carried out “in an appropriate way,” a good lawyer could secure the woman’s release.  “We’re going to forget the good or bad faith. But in what country can a person go to a camp, take 30 children, put them in a truck and cross a border saying that since they are orphans we’re going to help them,” the prime minister said. “That’s crazy. They had no proof that they were (orphans) and it was verified that at least half of those children had a father and mother who were looking for them and now they are with their families,” Bellerive said.
A judge in Haiti on Monday ordered the release of Silsby, who was accused of trying to take 33 children out of the country illegally after the Jan. 12 earthquake. Silsby is considered the organizer of a group of 10 U.S. missionaries who allegedly tried to take the children to the Dominican Republic. The group, made up of members of the Baptist organization New Life Children’s Refuge, was arrested in late January as they were traveling to the Dominican Republic in a bus with the children, who were between the ages of 2 and 12.
Bellerive said that now it had been confirmed that there were people who did not know what occurred in that case but others certainly knew that there was business activity going on and, the prime minister said, “an adoption today (costs) 30,000 or 35,000 euros (37,033 to 43,205 dollars) to receive a child in Europe.” Bellerive said that he himself had signed the papers so that at least 1,000 orphans could leave the country, with the confirmation that there was a family that was going to help each one of them.

For the original report go to http://www.laht.com/article.asp?ArticleId=357156&CategoryId=14092