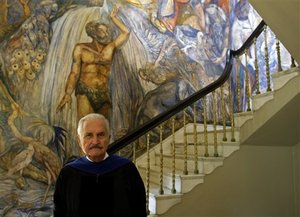 One of Latin America’s most prominent contemporary writers accepted an honorary doctorate Friday in Puerto Rico, where the government recently banned his novel from public high schools, the Associated Press reports. (See post on awards below.) Carlos Fuentes called dropping Aura from the curriculum an arbitrary decision that amounted to an “antidemocratic, anticultural” act. He spoke to reporters briefly before addressing dozens of professors and students at the University of Puerto Rico.

The author of The Death of Artemio Cruz and The Old Gringo said that even at age 81, he is still working on several books — including one about Colombian guerrillas that he struggles with because current events constantly render it outdated. Fuentes also urged journalists not to wait until they encounter a totalitarian government to defend freedom of the press. “We take it for granted,” he said.

His visit comes six months after Puerto Rico’s education secretary announced a ban on five books — including Aura — because of “coarse” language. Fuentes said that while he has a certain responsibility as a writer to speak out against injustices, it is not his main job. “A writer’s responsibility lies with language, to maintain the vitality of language,” he said.

For more go to http://www.google.com/hostednews/ap/article/ALeqM5gWUTYbtVELbUqOkrFpaUof96lcSgD9EMHLHO0

AP Photo: Mexican writer Carlos Fuentes poses for a photo at the main campus of the University of Puerto Rico in San Juan, Friday, March 26, 2010