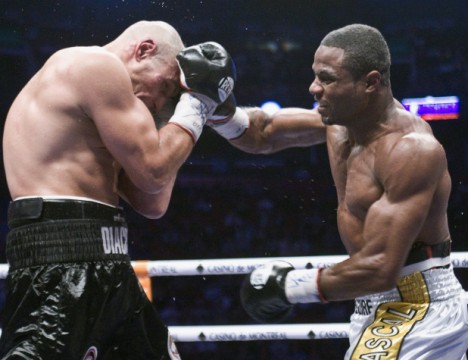 Haitian-Canadian light-heavyweight WBC champion Jean Pascal (27 years) will face the undefeated Chad “Bad” Dawson (from the United States) on August 14, 2010, in Montreal. His promoter, Yvon Michel, explains that “Jean will have to go to New York to promote the fight and to attend a photo session.” He says that Pascal will have to defeat the technically skillful Chad Dawson “if he wants to see his name among the 10 best fighters in all weight divisions on the planet.” He is convinced that Pascal has what it takes to win.

According to Michel, Pascal will have the added ingredient of the presence of trainer Pedro Díaz. He reminds us that that Pascal has benefited from the expertise of Dr. Díaz since his first duel with Adrian Diaconu, which earned him the light-heavyweight WBC title at the Bell Centre in Montreal on June 19, 2009.

Pascal became a star in England after his duel with Carl Froch on December 6, 2008 in Nottingham, where the latter won. The English boxer promised a rematch if the Haitian champion could win the Super Six.  Michel says, “Remember that Jean had just had a shoulder injury and that he was not working with Pedro Díaz for that fight.” He trusts that the Port-au-Prince native has greatly improved since then and given a rematch, “Jean will demolish Froch.” Jean Pascal (1m89) has a record of 25 victories, including 16 before the time limit.

Photo of Diaconu and Pascal fight from http://www.dailymail.co.uk/sport/othersports/article-1194349/Canadian-Jean-Pascal-lands-WBC-light-heavyweight-title.html