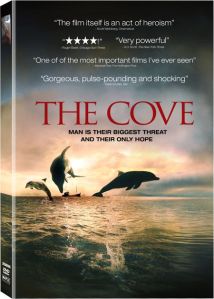 The Cove, which showcases the yearly killing of dolphins in a Japan town, won the 2010 award for Best documentary on Sunday night in Los Angeles. The film features Dominica as a small island whose stance with respect to the conservation of whales and dolphins has drawn worldwide attention, according to local Conservationist Atherton Martin.

An “astounding piece of investigative journalism with the heart of an action thriller,” The Cove follows animal activist and former dolphin trainer Ric O’Barry and his high-tech dive team on a mission to discover the truth about the international dolphin capture trade as practiced in Taiji, Japan. One of the best reviewed films of the year, The Cove was hailed as “gorgeous, pulse-pounding and shocking” (Elle Magazine), “very powerful” (The New York Times), “a gripping thriller” (Philadelphia Inquirer) and “the year’s most exciting film” (The Huffington Post).
“Because the movie “The Cove” is the academy award winner in the feature documentary category, it is now being shown already in 120 countries around the world, and all the millions of people who will go to see that movie will see that the movie ends, telling the story of this tiny little island, which is now a leader in the protection of whales and other species in the world’s oceans,” Martin explained. He added that the promotion Dominica will gain from the award-winning film, is “an opportunity that we could never have afforded to pay for.”

For more go to http://dominicanewsonline.com/?p=5857