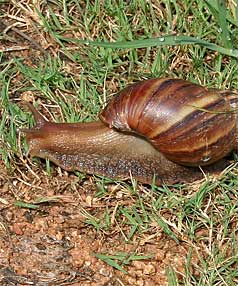 Florida authorities are banding with the federal government to keep giant African snails from entering the United States from the Caribbean. The destructive snails – which are illegal to import into the United States without a permit – are considered serious plant pests and can cause structural damage to buildings. Experts said it devastates new ecosystems. The snail grows up to 10 inches long, can reproduce on its own and can even eat plaster.

Originally from East Africa, the snail has moved across the Indo-Pacific Basin, including the Hawaiian Islands and have also been found in the Caribbean islands of Martinique and Guadeloupe with recent detections in Saint Lucia and Barbados.

In 1966, three snails were smuggled into Miami as pets. Seven years later, more than 18,000 snails were found, requiring almost a decade and more than $1 million to eradicate them from Florida, where they have been linked to little understood African-derived religious practices.

Recently, devotees of a man claiming to practice a traditional African religion said they had to ingest the mucus of a Giant African Snail that sickened them. US authorities in January raided the Miami man’s home after receiving complaints. The man has not been criminally charged, but prosecutors and state and federal wildlife agencies are investigating. The man said he meant no harm, and his (unidentified) religion uses the snails in healing ceremonies. Followers said they got violently ill, losing weight and developing strange lumps in their stomachs.

I have never heard of such “African-derived” practices, which may be nothing more than a misguided effort to “demonize” the pesky and unwanted “African-Caribbean” snails.

You may add the snails to the numbers of Caribbean immigrants not welcome in Florida.