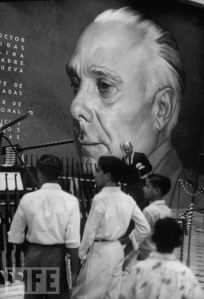 Last Thursday, Angelita Trujillo, Dominican dictator Rafael Leonidas Trujillo’s youngest daughter, was scheduled to present her new book on her father, Trujillo, mi padre at the J. W. Marriott hotel in Miami. The event was expected to be transmitted via video-conference at the Salón Caonabo of the Hotel Santo Domingo. The Miami audience had its chance to see the clueless Angelita present her book. The Dominican event was marred, however, by dozens of noisy protesters who gathered outside the hotel shouting “Trujillo murderer!,”  and “Angelita murderer!” The protesters were dozens of relatives, nephews and friends of Antonio de la Maza, Luis Amiama Tió, Rafael Augusto Sánchez and Antonio Imbert Barrera. The four, known as the “Heroes of May 30,” were the conspirators who plotted the assassination of Trujillo on May 30, 1961. Holding signs reading “Respect to the Heroes of May 30” and “Trujillo, assassin and thief!”  they protested the book’s claim that the four, and not Trujillo, had been responsible for the murder of the Mirabal sisters. The famous sisters were among the 50,000 victims (as confirmed by the United Nations) of the 31-year long tyranny headed by Angelita Trujillo’s father. 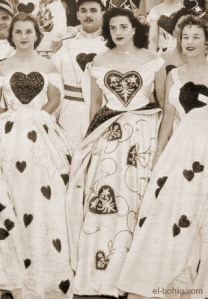 Angelita’s book offers an extensive defense of her father as a man of great rectitude who had a clear vision of how to rule the country as a “nationalistic, free, and sovereign state.”

“My father dreamt of turning the country into a true nation. He never lost sight of this goal. My mother tells me that once, when visiting the United States, he drove in ecstatic contemplation of  the development surrounding him, the buildings, the highways, all the obvious wellbeing, and my mother said he looked at her and said ‘that is how I want to see my country.’”

“I often heard my mother speak of his courage, his daring, his good star. Many of the anecdotes I read in books I had already heard from my mother’s lips. There were many obstacles, as we learn later, but as I heard my mother’s stories I grew more certain in my admiration and love for such a singular being. As with any triumphant man, a political giant, a relentless and dedicated fighter on behalf of his political goals, he had detractors and adversaries . . . but allies and enemies all agree in one point, that Rafael Leónidas Trujillo Molina was an exceptional, extraordinary figure.”

¡The nation, which forged my father; my father, the architect of the nation!”

It goes on like that for about another twenty paragraphs, which you can access (in Spanish) through the link below. I can’t translate anymore because if I do I am going to puke over my computer, so access at your peril. The hero-worship of this most villainous of dictators is sickening. I may just go and join the protesters. I never thought I would feel like burning a book . . .

For more on the protest go to http://www.dominicantoday.com/dr/local/2010/2/26/34938/Protest-aborts-Dominican-tyrants-daughters-book-debut