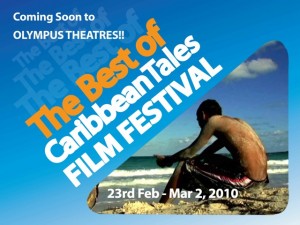 Caribbean Tales, a Toronto-based multi-media company, brings together formidable local, regional and international partners, to showcase, discuss and promote Caribbean film at “The Best of Caribbean Tales 2010: Film Festival and Symposium.” The festival, which began last night, takes place at the Olympus Cinema, Sheraton Centre and at the UWI Cave Hill Campus, from February 23rd to March 2nd, 2010. Frances-Anne Solomon, an accomplished Toronto-based Trinidadian filmmaker, is the Festival Director. Solomon’s most recent award-winning feature film “A Winter Tale” has won international acclaim. Solomon has also held the post of visiting lecturer at the UWI.
She recently shared her views on the Festival with the Barbados Advocate.
“February is Black History Month and it is fitting for us to mark this with a celebration of film, to start the year with a bang and to push the discussion forward on how we can create a sustainable and profitable industry,” Solomon noted. “It seemed fitting that we kick off this extraordinary year with a discussion in the Caribbean and Barbados is dynamic, central and accessible,” Solomon also stated.
The festival will be partnering with a number of local organisations that will co-host a “Symposium on Global Distribution” at the Shridath Ramphal Centre at the University. A Film Market will also be co-hosted at the Festival and The Barbados Film and Video Association (BFVA) will host a workshop providing educational screenings for high school students. There will also be a week of public screenings of some of the best Caribbean and Black international feature films and shorts produced in recent years hosted by the BFVA.
“I am delighted that Barbadian audiences will get to see some of the wonderful films we saw at the Caribbean Tales Festival in Toronto this year, including a fantastic cross section of work by our most important filmmakers from around the Diaspora,” President of the Barbados Film and Video Association, Penelope Hynam stated.
The Caribbean Tales Film Festival is North America’s only stand-alone festival showcasing the best of Caribbean cinema from around the world. Founded by Solomon, the festival has survived, grown and thrived in the highly competitive Canadian festival scene to become a notable event in the city’s calendar. This year the Caribbean Tales Film Festival welcomes three new Associate Directors who will work alongside Solomon to program, manage and promote the festival. They are Jamaican filmmaker Mary Wells, Trinidad-based Producer, Director and TV Personality Lisa Wickham and Mitzi Allen, Chief Executive Officer and Co-owner of HAMA TV in Antigua.

For more information go to http://bestofcaribbeantales.wordpress.com

For more on the interview with Solomon go to http://www.barbadosadvocate.com/newsitem.asp?more=lifestyle&NewsID=8673