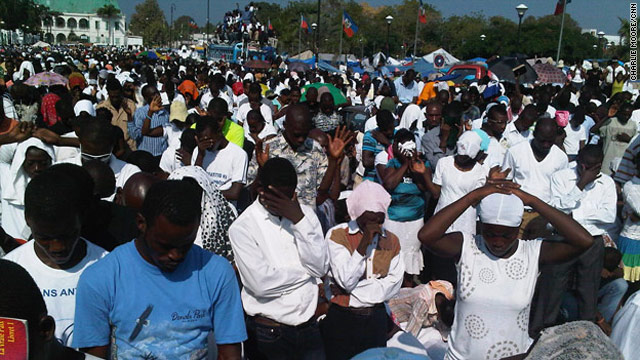 EFE reports that thousands of Haitians gathered Friday to pray a month after the devastating earthquake that claimed more than 200,000 lives and left close to a million people homeless.
Crowds swarmed outside dozens of churches around the capital and other places set aside as places of worship, while daily activities came to a halt on this official day of mourning.
The magnitude-7.0 quake that occurred at 4:53 p.m. on Jan. 12 marked a before and after for the poorest country in the Americas.
Fedner, a middle-aged man who on Friday followed one of the religious ceremonies from an SUV together with two friends, recalled that “many people died and the families haven’t found the bodies. There are still people under the rubble.”
“Up to now there has been no funeral, so that today is an important day, a date that we will always remember. Today will remain in the memory of every Haitian,” he said.
Many Haitians had no chance to bury family and loved ones who were dumped in common graves nor give them the honors of a decent funeral.
Fedner’s friend Bertrand said that this commemoration will not replace the funerals that could not be held to pay last respects to members of his family that he had lost: two brothers, a sister, an aunt and a cousin.
“This ceremony is no substitute for funerals, but it makes us think about how we are living and how we must trust in God,” he told Efe.
Among the crowds attending the commemoration, black clothing prevailed, a symbol of mourning, and white, typical of funerals, as requested by the government, which called on Haitians to attend today’s ceremonies in an atmosphere of “consensus.”
The commemoration is part of the month of mourning that was declared after the Port-au-Prince catastrophe, which will end next Wednesday.
The main ceremony, in a tent filled with flowers, was held at the nursing school of the University of Notre Dame on the capital’s east side, with President Rene Preval and other officials, diplomats and dignitaries in attendance.
Meanwhile religious acts were also held in Petit-Goave, Jacmel, Leogane and other towns that took direct hits from the temblor.
Similar commemorations took place in other cities around the country and in rural areas, where many people followed the ceremonies over the radio and by means of loudspeakers installed for the occasion.
Since this was an official holiday, few people were to be seen in the streets of Port-au-Prince, almost vacant compared to a normal day.
The only transactions going one were the usual ones at street markets, though with hardly any customers, and of course the distribution of humanitarian aid.
To follow the ceremonies in an atmosphere of reflection and to meditate together, many Haitians closed streets to traffic using stones and cement from buildings left in ruins. For the original report go to http://www.laht.com/article.asp?ArticleId=352321&CategoryId=14092