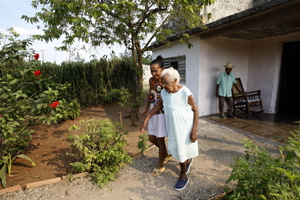 The Associated Press reports that relatives in eastern Cuba claim to have held a 125th birthday party for a woman named Juana Bautista de la Candelaria Rodriguez, but it is not clear if she is really that old.

The state-run news agency Prensa Latina reported on the party last weekend in the city of Bayamo in Granma province, attended by Rodriguez’s family, including 15 great-grand children and four great-great-grandchildren.

Prensa Latina said Rodriguez, known affectionately as “Candulia,” is “presumably the oldest person on the planet, although that has not been confirmed.”

In a phone interview with Cuban media, Rodriguez said she was happy and looking forward to many great years ahead.

The agency added that civil registry documents confirm she was born on Feb. 2, 1885, in the village of Santa Rosa, where she continues to live.

The Guinness Book of World Records says it has never heard of the case.

“We currently have not received a claim relating to the individual,” spokesman Philip Robertson told The Associated Press on Tuesday.

Robertson said Guinness gets claims via its Web site about once a week involving people who say they or someone they know have broken age records. After an especially old person’s age is verified, or death is reported, the number of claims usually spikes.

He said the company only sends genealogists and other experts to trace family histories for the most promising reports, however, and few are authenticated.

The highest fully authenticated age was 122 years, 164 days by Jeanne Louise Calment, who died in 1997 in Arles, France.

For the original report go to http://www.google.com/hostednews/canadianpress/article/ALeqM5jAcEqDrQR2pP5Iw_dG6jSVyb_l1w

2 thoughts on “Cuban woman is 125, perhaps oldest person on Earth”