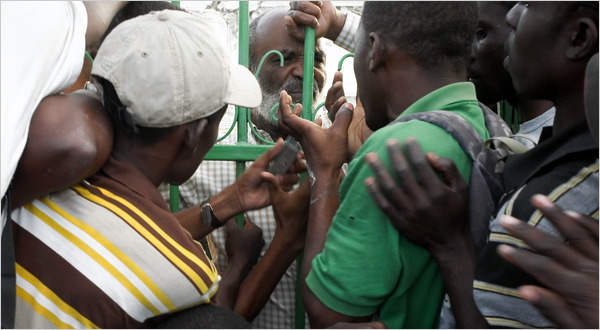 In the wake of the article posted above—claiming that Haitians want the United States to take over the country—comes this article from the New York Times detailing the power void that has been left by René Préval’s ineffectiveness as president of Haiti since the catastrophe, and more explicitly, how the U.S. ahs been keeping aid away form the government’s control. Here are some excerpts from the article, which you can access through the link below.

The journalists had assembled and the cameras were rolling. Seated at center stage were the American ambassador and the American general in charge of the United States troops deployed here.

At the back of the room, wearing blue jeans and a somber expression, stood President René Préval, half-listening to the updates on efforts to help Haiti recover from its devastating earthquake while scanning his cellphone for messages. Then he wandered away without a word. That moment last Wednesday was revealing of the leadership crisis taking hold in Haiti as it faces the task of rebuilding almost every corner of Port-au-Prince, the capital.

Foreign nations have sent hundreds of millions of dollars in assistance, only to find the government too weak to harness it. Virtually every symbol of this country’s political system vanished into the rubble. The seat of government has been reduced to little more than a platform beneath a towering mango tree outside a police station near the airport.

Parliamentary elections have been indefinitely postponed. Radio programs have become soap boxes for opposition leaders to strike the government while it is down. A nation that had been looking forward to a rare, peaceful transfer of power is now experiencing familiar — albeit faint — rumblings of chaos and coups.

During the greatest disaster Haiti has ever faced, its president has seemed incapable of pulling himself together, much less this deeply divided society.

In the immediate aftermath of the quake, Mr. Préval seemed to wander around in a daze, lapsing into moments of disorientation. The morning after, he sent a taped message to the nation, his only one so far, to a radio station, dispassionately reporting details of the damage and urging listeners, “Kembe,” the Creole term for “hold on.”

In recent days he has begun to take steps to reassert authority and restore his government, but given Haiti’s turbulent and unforgiving politics, the damage may have been done.

Mr. Préval makes no apologies for his low profile. “I don’t do politics, O.K.?” he huffed in one recent interview. “My work is to find ways to ease the pain of those suffering, instead of being trailed by journalists to pose for pictures with people who suffer.”

He boasts that government workers have cleared the streets of about 170,000 bodies. But with so little else to show for his efforts in the nearly three weeks since the earthquake, few are convinced that Mr. Préval is doing anything at all. Despite a flood of foreign aid, hundreds of thousands of people continue to languish in squalid shelters.

Publicly, the international organizations here emphasize at almost every turn that they are working under Mr. Préval’s direction. Privately, United Nations and American officials said they did not believe he was up to the task.

Because of concerns about the government’s history of corruption and inefficiency, only a fraction of the aid flowing into Haiti is permitted to pass through government channels.

The disappointment in the president seems most palpable. Judith Marceline, a former nurse who lost everything in the quake but the dirty flowered dress she was wearing Sunday, said that she stood in line for hours to vote for Mr. Préval in 2006. Today she wonders why.

“When he needed us, we went out to support him,” she said. “Now that we need him, where is he?”Mr. Préval, like Haiti, is no stranger to crisis. In fact, he rose to power as its antidote. After several volatile decades marked by dictatorships and populist governments, the simple, soft-spoken agronomist appealed to a country looking for a cool technocrat to lower the political temperature.

During his first term in office, from 1996 to 2001, he is credited with building dozens of public schools, putting tens of thousands of people to work and issuing titles to thousands of acres of farmland.

In his second term, which began in 2006, Haiti experienced modest, but hopeful, levels of growth and security.

Political tensions, however, began to flare after Mr. Préval’s handpicked electoral council disqualified more than a dozen opposition parties from taking part in this year’s elections. The move put Mr. Préval at odds with his old mentor, former President Jean Bertrand Aristide, who, even in exile, remains adored by the poor.

Slowly it appears that Mr. Préval has gotten the message, many say.

In recent days, he sent his prime minister, Jean-Max Bellerive, to address a meeting of donors in Montreal. He ordered public works projects outside the capital to get back to work, and children in those areas to return to school.

He appointed a group of government ministers and private-sector leaders to serve as liaisons between his government and the hundreds of international organizations delivering assistance to this country.

Most notably, he has begun to stake out a place on the public stage, giving interviews and holding news conferences. On Friday, he spoke at length to reporters at Radio Television Caraïbes, outlining his vision for a new, less congested capital, where the government employs people to help clear the rubble and rebuild their own homes.

Responding to criticism of his displays of distress after the earthquake, he said, “Even though I am president, I am human first.”

To those who have suggested that the recovery ought to be moving more quickly, he said, “They underestimate the magnitude of the problem.”

And when asked for a political forecast, he sounded more hopeful than sure, saying that he would try to push ahead with the presidential election, scheduled for November, as the best way to guarantee political stability.

“I want this to be a new country,” he said, waving his hands for emphasis. “I want it to be totally different.”

One thought on “In Quake’s Wake, Haiti Faces Leadership Void”