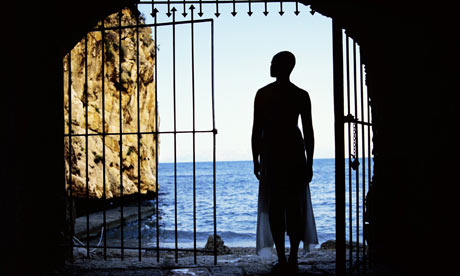 Fred D’Aguiar celebrates the profound influence Black Atlantic culture—spanning Africa, the Americas and Europe—has had on artists, from Picasso to Chris Ofili, in his review of a new exhibit at Tate Liverpool entitled Afro Modern: Journeys through the Black Atlantic, Curated by Tanya Barson and Peter Gorschlüter, the exhibit runs through April 25. Here are some excerpts, with a link to the full article below.

So many arguments line up about black being in Afro Modern that text and context vie for attention with image and picture, but ultimately both work in harmony. Politics in art wears not so much a veil here as a series of masks. While many will know of the Harlem renaissance in the 20s or the Négritude movement (which privileged a black experience, including black speech, as a governing principle for black artistic practice) founded in the 30s by Aimé Césaire and others, far fewer will be familiar with the Brazilian Manifesto Antropófago of 1928, which argued that artists should consume European influences before those influences consumed them. Mercifully short-lived, it reduced the arts to consumption, and lacked the subtlety of imaginative give-and-take.

Room two is devoted entirely to Maya Deren’s footage from the late 40s and early 50s, later edited and released as Divine Horsemen: The Living Gods of Haiti. The black and white film is rich in detail and makes compelling viewing. Haitian music and dancing, the confident commentary asserts, gave rise to jazz and the blues. African voodoo and Catholic rituals come together in a replenished spirituality.

At Tate Liverpool, Isaac Julien’s Cast No Shadow, an image in a lightbox of a woman standing at open iron gates with a very blue and enticing sea in the background, appears to replay the departure of slaves at the point of no return found at so many coastal forts in Ghana. Julien’s image derives its power in part from its rigidity and stillness, along with an appeal to the group memory of the experience.

Looking through the lens of the black arts movement seems as good a way as any to test the predictive and prescriptive nature of the visual arts over the last century in the UK, US, Africa, Caribbean and South America. “Afro Modern” may be too precise a term to contain such multitudes and “black diaspora” too loose. There is a tussle, too, within the arts between furthering art in the direction of experimental art-for-art’s-sake, and art engaged with politics since it is only valuable if it is moral in scope. Ellen Gallagher’s Bird in Hand works against such a division: a lone figure, who could be male, stands in the middle of a huge canvas, surrounded by roots and hanging flora, sporting a massive afro. The strands of hair suggest a nest of sorts, and the message becomes one of conservation: the person cannot be detached from the natural environment and there is symbiosis in the entanglement.

Sonia Boyce and Keith Piper display historical imaginations wedded to complex counterculture narratives. And among the most arresting work in the first room are two paintings of Josephine Baker by Paul Colin. He captures her wiry movement and limber flesh unconstrained by mere bones. He makes it clear, too, that her trade has a primitive appeal, her banana and palmleaf skirts barely cover her and reveal more of her than I imagine a peepshow would. She is topless, and her skin is her only covering. She completes a picture of primitive energy and boundless sex appeal, horribly dubbed negrophilia (these were living, breathing subjects), which was supposed to rejuvenate a clapped-out Parisian art world with its vapid futurism. Baker turns out to be a saviour of European modernity, but her dance and trance traps black women in a new prison of the one-dimensional, sexual body.

Colin’s eye for voyeurism and the black female body as fetish is debunked by Candice Breitz’s Ghost Series, where black nudity stands out with white paint and resembles a blazing photographic negative. Her women push back at the viewer, inviting questions about what is depicted and how certain effects are achieved. As emblems of domesticated, quotidian nudity, her women are made resistant to fetishisation.

A similar rebellion against outrageous convention emerges in Tracey Rose’s photographic self-portrait, Venus Baartman (2001). Rose poses as Sarah Bartmann, or Saartjie Baartman in Afrikaans, a Khoi-San (or Hottentot) woman from Cape Town, South Africa. Brought to England in 1810, Bartmann toured London and Paris as a sideshow nude attraction to prove how black female anatomy, in this instance her large buttocks, differed markedly from white women’s features. Bartmann died in London and her private parts were surgically removed and stored. Rose’s moving work is an act of empathy and imagined solidarity. It goes well with Carrie Mae Weems’s photos of “negroid types”, which critiques white scientific attempts to establish black unsuitability for equality with whites. Under these racist terms, black physical characteristics are somehow different, and black people become not-quite-human.

For the full article go to http://www.guardian.co.uk/artanddesign/2010/jan/30/afro-modern-tate-liverpool