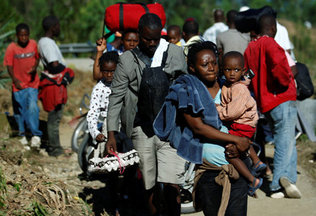 The award-winning team of reporters from the Miami Herald, which include Jaquie Charles, have been maintaining their accustomed excellence in reporting from and about Haiti. [In 2009 Charles won numerous awards for her coverage of the floods in Haiti, while her colleague Patrick Farrell won the Pulitzer for news photography for the same coverage.] They were the first to reach the city of Jacmel and report on the devastation there. Here are excerpts from their reports, which you can access through the link below.

While the world’s attention focused on earthquake-ravaged Port-au-Prince, a catastrophe of parallel magnitude has been unfolding in isolation on the country’s southern coast, which the quake left littered with smashed buildings and extensive casualties.

Stranded and increasingly desperate residents of Jacmel, a quaint, historic Caribbean port city that suffered widespread damage and has been cut off from Port-au-Prince to the north, complain they have been forgotten. Four days after the quake struck Jacmel with equal force, they say they are still awaiting food, water, medical supplies and relief workers.

In scene after scene that eerily echoes the destruction seen the world over in Port-au-Prince, two-story buildings throughout downtown Jacmel — a tourism center of some 40,000 people known for its art, French Colonial architecture and a spellbinding carnival — have been reduced to concrete rubble. Residents walk through the streets with bandannas covering their faces because of the pervasive odor of decomposition that hangs over the city.

A vocational and auto-repair school, the Eunasmoh Institute, points to the severity of the local disaster: At least 100 students were crushed when the building collapsed in the quake, neighbors said. The trapped bodies of the victims could still be seen Friday, crushed arms and stiff legs protruding from the ruins.

But piles of dirt and fallen boulders block the narrow, winding road through the mountains from Port-au-Prince to Jacmel, and residents say help has yet to make it through. They wonder if the outside world is even aware of what happened here.

Miami Herald journalists who provided the first news accounts out of Jacmel traveled to the city Friday from Port-au-Prince partway by car, briefly hiked closer to the city on foot and entered on motorcycle taxis Jacmel is known for. Before dusk fell Friday, a government bulldozer had begun working to clear the road.

The epicenter of Tuesday’s quake was located between Jacmel and Port-au-Prince, which are about 25 miles apart. The destruction in Jacmel may have initially escaped outside notice because of U.N. briefings that said damage from the quake appeared mostly restricted to Port-au-Prince.

For the complete report and photos go to http://www.miamiherald.com/582/story/1426712.html

Photo by Carl Juste for the Miami Herald.