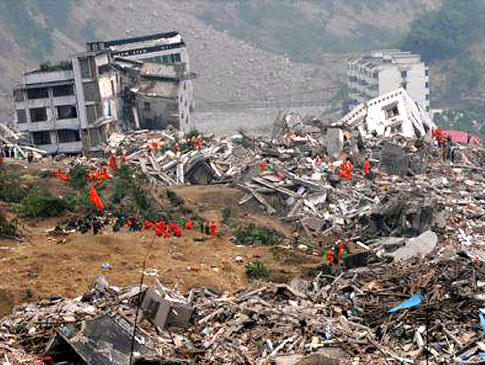 The Associated Press issued this update on the earthquake in Haiti at midnight today:

The strongest earthquake in more than 200 years rocked Haiti on Tuesday, collapsing a hospital where people screamed for help and heavily damaging the National Palace, U.N. peacekeeper headquarters and other buildings. U.S. officials reported bodies in the streets and an aid official described “total disaster and chaos.”

United Nations officials said hours after the 7.0-magnitude quake struck at 4:53 p.m. that they still couldn’t account for a large number of U.N. personnel.

Communications were widely disrupted, making it impossible to get a full picture of damage as powerful aftershocks shook a desperately poor country where many buildings are flimsy. Electricity was out in some places.

Karel Zelenka, a Catholic Relief Services representative in Port-au-Prince, told U.S. colleagues before phone service failed that “there must be thousands of people dead,” according to a spokeswoman for the aid group, Sara Fajardo.

“He reported that it was just total disaster and chaos, that there were clouds of dust surrounding Port-au-Prince,” Fajardo said from the group’s offices in Maryland.

The Diocese of Norwich in Connecticut said at least two Americans working at its Haitian aid mission were believed trapped in rubble.

Alain Le Roy, the U.N. peacekeeping chief in New York, said late Tuesday that the headquarters of the 9,000-member Haiti peacekeeping mission and other U.N. installations were seriously damaged.

“Contacts with the U.N. on the ground have been severely hampered,” Le Roy said, adding: “For the moment, a large number of personnel remain unaccounted for.”

“Buildings collapsed all over the place,” he said. “We have lives that are destroyed. … It will take at least two or three days for people to know what’s going on.”

Haiti’s ambassador to the United States, Raymond Joseph, said from his Washington office that he spoke to President Rene Preval’s chief of staff, Fritz Longchamp, just after the quake hit. He said Longchamp told him that “buildings were crumbling right and left” near the National Palace. The envoy said he had not been able to get back in contact with officials.