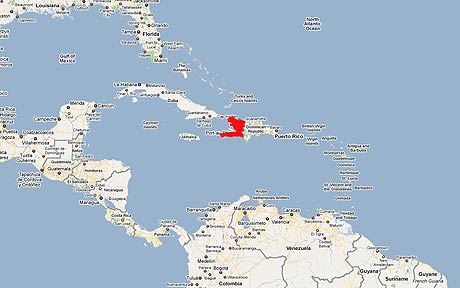 Caribbean Community (CARICOM) countries are promptly reacting to the trail of death and destruction caused by the powerful earthquake in Haiti. Trinidad and Tobago and Guyana both announced one million US dollars each in immediate relief to Port-au-Prince; St. Lucia said it would provide assistance under the wider CARICOM initiative; and Jamaica has said that it will “respond immediately in whatever way it can.” Guyana’s President Bharrat Jagdeo said that “Haiti needs all countries, including the small developing countries to come to its aid urgently.”

Montserrat’s Chief Minister Reuben Meade said that the destruction in Haiti “makes our volcano seem like a baby” and that “we within the Caribbean region must mobilize resources to ensure that we can make some structured support for Haiti.” Jamaica’s Prime Minister Bruce Golding said that “Jamaica has always responded immediately in whatever way we can to natural disasters in Haiti and this time will be no exception. Already, the mobilization of relief supplies is underway. Contributions from the private sector as well as supplies from the Office of Disaster Preparedness (ODPEM) will be sent to Haiti today.” Jamaica will also send members of the Defence Force “to participate in reconstruction efforts that will enable basic infrastructure of electricity, water, and telecommunications to function again.”

CARICOM Chairman and Prime Minister of Dominica, Roosevelt Skerrit explained that “while we are very encouraged by the many expressions of international support already pouring in to Haiti, CARICOM as a region also intends to play its part.” St. Lucia’s Prime Minister Stephenson King said the specifics of his government’s response would be “spelt out soon following the receipt of the assessment.”

Chancellor Bruno Rodríguez announced today that Cuba is sending doctors, medicines, and medical equipment to Haiti, where 403 Cuban volunteers were already residing. The Cuban government was able to confirm that these volunteers, 344 of which are doctors or paramedics, survived the earthquake and are busy attending to the injured.

Puerto Rico has opened several emergency aid centers for the victims of Haiti’s earthquake. The Mayor of San Juan, Jorge Santini, reported that the capital will have collect non-perishable food, clothing, and medicines at the Hiram Bithorn baseball stadium. President of Ferries del Caribe [Caribbean Ferries] and Marine Express, Néstor González, reported that his companies will transport goods free of charge from Puerto Rico to Haiti. Meanwhile, Amnesty International has announced that sales proceeds from works of art donated by renowned Puerto Rican artists will go towards Haiti.

This morning, interim Governor of Puerto Rico, Kenneth McClintock, with the approval of Governor Luis Fortuño (presently in Washington, DC), confirmed that the island will provide the Haitian Government with immediate assistance. Puerto Rico’s State Agency for Management of Emergencies of Puerto Rico was alerted to send its rescue unit with workers and physicians to aid in providing medical care, food, and to help search for persons trapped in the rubble. In a statement asserting the Puerto Rican government’s will to help the Haitian people, McClintock stated, “Today we are not citizens of Puerto Rico; today we feel like we are all Haitians.”