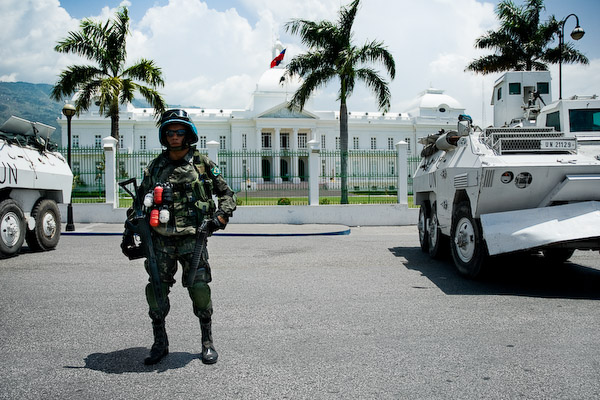 Presidential and legislative elections are the major challenge facing Haiti in 2010 and the United Nations will provide the necessary security and logistical support to further their success, the world body’s top official in the crisis-prone country told his first news conference of the new year.

“We will assure the entire logistical needs, which is a very heavy undertaking,” Secretary-General Ban Ki-moon’s Special Representative Hédi Annabi said yesterday, noting that the UN will help distribute electoral material to the more than 11,500 polling stations across the impoverished Caribbean nation as well as collect the ballots afterwards and bring them to Port-au-Prince, the capital, for tabulation.

“And we will assure security, so we will deploy police and military personnel throughout the country,” he added of the 11,000-strong UN peacekeeping mission in Haiti (MINUSTAH), which was set up in mid-2004 after then president Jean-Bertrand Aristide went into exile amid violent unrest.

“We cannot physically be present everywhere all the time, but we will try to be as present as possible with the personnel we have at our disposal to create an environment in which the people can go to vote freely and make their choice. And, of course, the deployed personnel will be authorized to intervene every time anybody tries to disrupt the electoral process.”

The elections are of capital importance for the future of democracy and the consolidation of stability in the poorest nation in the western hemisphere, Mr. Annabi stressed. “Their success will enable the country to enter a virtuous circle where stability and development mutually reinforce each other; their failure would contribute to further exacerbating distrust and suspicion and could undermine the progress made in the past four years,” he warned.

Reviewing the past year, Mr. Annabi noted that, despite the difficult national and international economic and social situation, Haiti managed to avoid the recession that hit so many other countries, with its gross domestic product (GDP) growing 2.5 per cent and, according to some predictions, on track to reach a 3.5 to 4 per cent growth in 2010. Agricultural production also increased substantially in 2009.

He cited MINUSTAH’s collaboration with local police in combating crime, leading to a reduction particularly in kidnappings, and pledged continuing UN technical and operational support in developing and reinforcing the national police force to enable it to assume alone the responsibility of maintaining order throughout the country.

“This new decade therefore starts on a note of hope that could translate into a new surge for the Haitian economy with all its concomitant benefits for basic social services and reducing the suffering of the least privileged,” he said.

“Haiti is today at a turning point in its history. We saw the hope of a new departure emerge on the horizon in 2009. It is now up to the Haitians, and only the Haitians, to transform this hope into reality by working together in the greater interests of their country.”