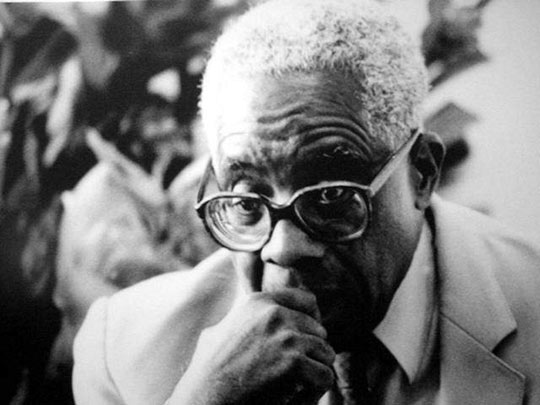 The Bookslut.com site has posted five poems from the unexpurgated 1948 edition of Aimé Césaire’s Soleil cou coupe (Solar Throat Slashed) translated by A. James Arnold and Clayton Eshleman. They had this to say about the translations, which include “Permit,” “Secret Society,” “Solid,” “The Law Is Nakes,” and “Year IX.” Their brief introduction to the poems says:

In the late 1950s, as Césaire became more politically focused, he radically revised this book, eliminating 31 of the 72 poems, and editing (some severely, some slightly) another 29. In 1961, he published the revised text (of which only 12 poems were the same as appeared in 1948), along with a short collection, Corps perdu (Lost Body), as Cadastre, and for decades Cadastre has represented Solar Throat Slashed. Of the five poems presented here “The Law is Naked” and “Year IX” appeared in Cadastre in edited, or pruned, form. The other three poems were completely eliminated from Cadastre. Arnold and Eshleman believe that the 1948 Solar Throat Slashed is Cesaire’s finest single collection of poetry. Wesleyan University Press will publish their cotranslation in 2011.

Readers interested in seeing what cuts were made in “The Law is Naked” and “Year IX” can check their forms in Cadastre as translated by Eshleman and Annette Smith in their edition of Aimé Césaire: The Collected Poetry (University of California Press, 1983). In that volume, “Year IX” is titled “New Year.”