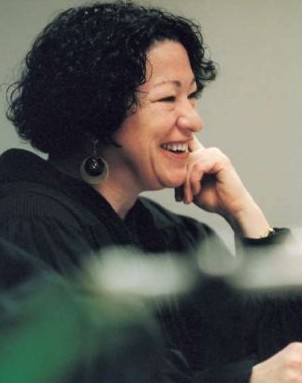 The Associated Press reports that Sonia Sotomayor is visiting Puerto Rico this week for the first time since becoming the U.S. Supreme Court’s first Hispanic justice, an achievement that has made her a celebrity in her parents’ Caribbean homeland. Sotomayor is arriving today at the invitation of judges in this U.S. territory. “Being a judge these days is not easy. There is a lot of a lack of respect for institutions,” said Chief U.S. District Court Judge José Fuste. “When you see a person like that who has been able to reach so much and achieve the highest position in the judiciary, it’s an inspiration.”

Sotomayor, who speaks proudly of her Puerto Rican heritage, is due to attend meetings with local judges and visit relatives during the trip, and probably will be accompanied by her mother, Celina Sotomayor, who was praised by President Barack Obama for setting her daughter on a path to success from a Bronx housing project. Sotomayor, 55, has often visited the island to see family and offer lectures. Her last visit came after her nomination by Obama in May but before she was sworn in as the court’s third female justice in August.

While Sotomayor was born in New York, many here see the rise of the self-described “Nuyorican” as symbolic of islanders’ achievements on the U.S. mainland, which is home to more than 4 million Puerto Ricans — more than live on the island. Sotomayor’s mother, a nurse, is from Lajas, a rural area on the southwest coast. Her father, who died when she was 9, was from San Juan. Many of Sotomayor’s cousins live around the western city of Mayaguez.

For the original report go to http://www.google.com/hostednews/ap/article/ALeqM5j_7hU0R1zxl5bq7gkQzf4V9AP1GAD9CJUVHG0