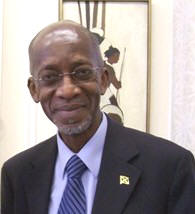 Jamaica’s High Commissioner to the United Kingdom, His Excellency Burchell Whiteman officially opened the extension of the Akweebah Ayeh Centre of Leicester’s Black Mental Health support group. He commended the organization’s initiatives in dealing with and advocating for mental health issues within the Black and minority ethnic communities. He encouraged the Caribbean leadership in Leicester to continue to engage young people in order to ensure the sustainability of the institutions their elders created.

During his visit, he met with Jamaican and other Caribbean nationals living and working in Leicester. He spoke about Jamaica’s economy and noted that the island has had particular success in increasing tourist arrivals, when most destinations in the world have seen a decrease. He also stressed that the government remains committed to ensuring that hospital care remains free, and that both primary and secondary education is tuition fee free. Whiteman added that, “in the face of the global economic downturn,” they are paying more attention to expanding agricultural production in order to feed themselves.

High Commissioner Whiteman was impressed with the level of unity and co-operation among Caribbean people in the United Kingdom, saying that they “have carved out their own place in the history of the United Kingdom, and have demonstrated the value of working together for their own advancement.”

Photo of His Excellency the Honorable Burchell Whiteman from http://jhcuk.org/index.asp