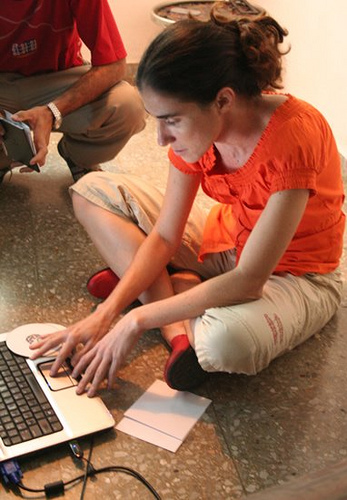 Cuban blogger Yoani Sánchez posted seven questions for President Obama related to the U.S.-Cuba relationship, the Cuban exile community in the United States, and Cuba’s emerging civil society groups. President Obama responded to the questions on November 18, and praised Sánchez for her blog, saying it “provides the world a unique window into the realities of daily life in Cuba”: “It is telling that the Internet has provided you and other courageous Cuban bloggers with an outlet to express yourself so freely, and I applaud your collective efforts to empower fellow Cubans to express themselves through the use of technology,” Obama said. The president has urged governments to relax Internet censorship, and recently told a Chinese audience that unrestricted access is a “source of strength.”

In his written answers, Obama said U.S. and Cuban authorities have held recent talks on “safe, legal and orderly migration” between the two countries and re-establishing a direct mail service. “It is also my intent to facilitate greater contact with the Cuban people, especially among divided Cuban families, which I have done by removing U.S. restrictions on family visits and remittances,” he said.

Obama described the talks on migration and direct mail service as being “small steps,” but said they are “an important part of a process to move U.S.-Cuban relations in a new and more positive direction.” The president said the Cuban government needs to take action for the two countries to enjoy “a more normal relationship.” He said he is prepared for the United States to engage with the Cuban government on a wider range of issues, but “I am not interested … in talking for the sake of talking.” In Cuba’s case, Obama said diplomacy “should create opportunities to advance the interests of the United States and the cause of freedom for the Cuban people.”

The Cuban government “is not the only voice that matters in Cuba,” Obama said. “We take every opportunity to interact with the full range of Cuban society and look forward to the day when the government reflects the freely expressed will of the Cuban people.” Obama told Sánchez that the United States “has no intention of using military force in Cuba” to end the long dispute between the two countries. He expressed his hope that the Cuban government “will respond to the desire of the Cuban people to enjoy the benefits of democracy and be able to freely determine Cuba’s future.”

Asked if he would be willing to travel to Cuba, the president said, “I would never rule out a course of action that could advance the interests of the United States and advance the cause of freedom for the Cuban people.” But he said such diplomatic tools “should only be used after careful preparation and as part of a clear strategy.”

“I look forward to visit a Cuba in which all citizens enjoy the same rights and opportunities as other citizens in the hemisphere,” the president said. The U.S. and Cuban governments, as well as the Cuban people regardless of where they live, should all agree on “the need to listen to the concerns of Cubans who live on the island” as part of moving the relationship forward. “This is why everything you are doing to project your voice is so important — not just for the advancement of the freedom of expression itself, but also for people outside of Cuba to gain a better understanding of the life, struggles, joys and dreams of Cubans on the island,” Obama told Sánchez.

The full text of President Obama’s reply can be found at Yoani Sánchez’s blog, Generacíon Y.

For the original report by Stephen Kaufman go to http://www.mexidata.info/id2475.html