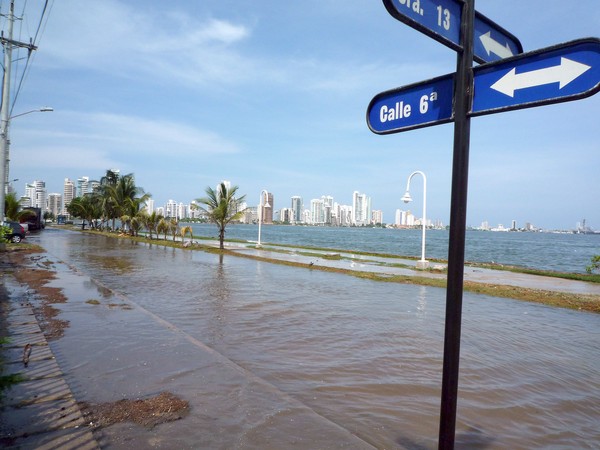 A recent article in the Los Angeles Times chronicle how the effects of climate change have begin to be recorded in the historic city of Cartagena de Indias in Columbia’s Caribbean coast. For five years, retired Colombian naval officer Germán Alfonso has watched tides rise higher and higher in the Boca Grande section of Cartagena. This month, tides briefly inundated the only mainland connection to his neighborhood, a converted sandbar where about 60 high-rise condo and hotel towers have been built in the last decade or so.

According to a recently updated World Bank study on climate change in Latin America, not only are the effects of global warming more evident in Latin American coastal cities, but the phenomenon could worsen in coming decades because sea levels will rise highest near the equator. Colombian naval Capt. Julian Reyna, a member of a government task force monitoring climate change, said the sea level around Cartagena, renowned for its Spanish colonial fortifications and beaches, has risen as much as one-eighth of an inch each year over the last decade, an increase that scientists expect to accelerate in coming years. According to some scenarios that the authors of the World Bank study say are not that far-fetched, Cartagena and the rest of the Caribbean coastal zone could see sea levels rising as much as 2 feet, possible more, by the end of the century. Even at the lower end of projections, parts of this city would be knee-deep in sea water.
One of the authors, climatologist Walter Vergara, cautions that the projections are based on trends and factors that could change, but he is worried that Colombia’s entire Caribbean coastal zone could see relocations of urban centers. Other Latin and Caribbean cities especially at risk include Veracruz, Mexico; Georgetown, Guyana; and Guayaquil, Ecuador, he said. “The projections are based on assumptions generally accepted by the scientific community and do not include the cataclysmic effects of possible advanced ice melting in the Antarctic or Greenland,” said co-author economist John Nash.
Even under the most benign of scenarios, Vergara and other scientists are concerned for Colombia’s Cienaga Grande, a mangrove marsh covering hundreds of square miles whose ecosystem could die because of increased salinity from higher tides. The forests could disappear and thousands of fishermen may be displaced. Agriculture in Colombia and other tropical countries is at greater risk than in the United States, Canada and Europe because temperatures are already relatively high in countries near the equator, and increases will be more damaging to growing conditions, Nash said.
Cartagena’s chief city planner, Javier Mouthon, said the local government is aware of what could be in store and is making plans beyond immediate effects that include a long-term “adaptation process.” That includes new roads and relocating city facilities to avoid permanently flooded zones.
Cartagena is already studying the feasibility of building dikes or collection pools and possibly requiring all construction to have foundations 20 inches higher than currently specified.
“We are quite concerned,” Mouthon said. “It’s a problem that grows year by year.”
For the complete Los Angeles Times article go to