The Climarte Contest in Havana, Cuba, hosted by the Center for Caribbean Studies (at Casa de las Americas), recently ended after months of deliberation. Climarte focused on the relationship between the arts and climate/environmental challenges of the Caribbean. Its aim was to find the image that best expressed concerns about the future of the region, where many fragile island territories and ecosystems find themselves threatened by human activity.

After examining 56 works of art, the jury of the Climarte—formed by Annalee Davis (Barbados), Cecilia Paredes (Costa Rica), and Pepe Menéndez (Cuba)—awarded the first prize to “Eichornia crassipes” by Dominican artist Polibio Díaz, who also received the an honorable mention for his work “Nadaban los peces fuera del agua” [The Fish Were Swimming out of the Water]. “Eichornia crassipes” will be used for the cover of the next issue of the Center for Caribbean Studies’ prestigious journal Anales del Caribe. The jury expressed that the winning image “infers that we are precariously gazing into a precipice from which there is no return” adding that it “provokes fear and suggests disaster or imminent chaos. It works as a high-impact image [where] the human being does hide, but rather participates as an active witness.” 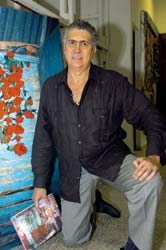 Polibio Díaz (1952) was born in Barahona, Dominican Republic. He studied photography at the University of Texas where he earned a degree in Civil Engineering. His photographic work has appeared in the yearbooks of Best Photography of the magazines Photographer’s Forum and Creative Photo, and was included in 100 Years of Photography 1899-1999, a photography exhibition at the Discovery Museum, in Bridgeport, Connecticut, which took “a centennial look back at the medium through the lenses of some of its most renowned practitioners [. . .], a veritable Who’s Who of photography” (with artists such as Henri Cartier-Bresson, Dorothea Lange, Edward Steichen, Ansel Adams, Walker Evans, and other leading world photographers. He has also contributed to books featuring his artwork such as Espantapájaros del sur [Scarecrows of the South], Imágenes de carnaval [Carnival Images], and Una isla, un paisaje [One Island, One Landscape], Interiores [Interiors], among others. He has presented at the 51st Venice Biennial, the 5th Biennial of the Caribbean, the 1st and 9th Havana Biennials, and many other exhibitions worldwide.