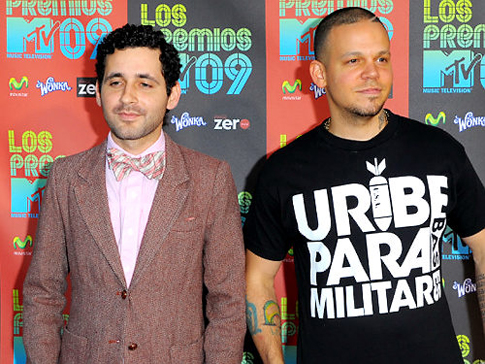 Puerto Rican hip-hop duo Calle 13 will be the focus of attention at this evening’s Latin Grammy Awards—not only because they lead all nominees with five nominations, including Record and Album of the year–but  because they’re in the middle of a to-do after singer after singer René (Residente) Pérez unleashed a scathing attack on a variety of Latin American leaders while recently hosting the MTV Latin America Awards. Mixing foul language and stinging political commentary, Pérez said, “Latin America is incomplete without a free Puerto Rico” and called the governor of the island a “son of a b” for the controversial layoff of 25,000 public employees. “I made him famous,” Pérez, 31, said of Luis Fortuño, the embattled governor whose belt-tightening measures have led to large protests, the likes of which have not been seen on the island in decades.

The five-time Latin Grammy winner also said the president of Argentina should “stop using Botox” and wore a series of T-shirts emblazoned with a variety of messages. Among the highlights: President Alvaro Uribe of Colombia belongs to illegal paramilitary groups, Honduras’ interim President Roberto Micheletti “rhymes with Pinochetti,”and one shirt saying Venezuela’s President Hugo Chávez has been “nominated for Best Pop Artist.”

Newspapers, TV and radio shows in Puerto Rico have been busy debating whether Calle 13 went too far. Even Pérez’s mother had to weigh in. But Pérez had no regrets. “Yes, it was the best,” he said from Venezuela, where Calle 13 performed last week. “It was the only way to capture the attention of Latin America, where there are worse problems than layoffs … if not, no one was going to pay attention.” But, he said, there will be no repeat attention-grabbing performance tomorrow. “The MTVs are the MTVs and the Grammys are the Grammys. They are different forums, have different audiences,” he said. “I’m René, I behave well, I am a quiet guy.”
That may be a stretch, but Pérez will likely be at his best behavior during the Latin Grammys, which air at 8 p.m. on Univision.