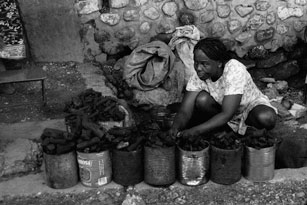 An Environment Ministry study in Baoruco and Independencia provinces in the Dominican Republic  identified 23 communities where 200 people make 37,000 sacks of charcoal per month, a clandestine market worth RD$89.2 million (US$2.5 million) yearly.  The Cross-border Environmental Program report presented last month found a charcoal-marketing network concentrated in 19 villages of the region. “All production is finally gathered in Tierra Nueva, Boca de Cachón and Puerto Escondido from where it takes the trails and routes towards Haiti, crossing mainly through lake Azuéi.” It details a simple yet effective chain to make, traffic and illegally market charcoal in Haiti and notes that the 200 producers are mostly of Haitian origin, helped by 12 Dominican truck drivers, to produce every month around 37,000 sacks, sold to less than five Haitian retailers, who gather on the west side of the lake, for subsequent transport and sale in Port au Prince.

“This production equals 445,788 sacks annually (27,300 tons) which is sold at RD$200 (US$5.55) per sack, generating an annual market of RD$89.2 million, US$2.5 million).” the study headed by the consultant Humberto Checo said. “This opportunity to generate income, nestled in a captive market, has caused a severe deterioration to the base of the natural resources along the entire border region, where an important process of blight, severe biodiversity losses, poverty and corruption is also evident,” it adds.

The Dominican Republic has intensified efforts to reforest the border region and stop the cutting of trees for the production of charcoal. The measures have led to some violence on the border where four Haitians were killed recently when a group of ranchers found then producing charcoal.