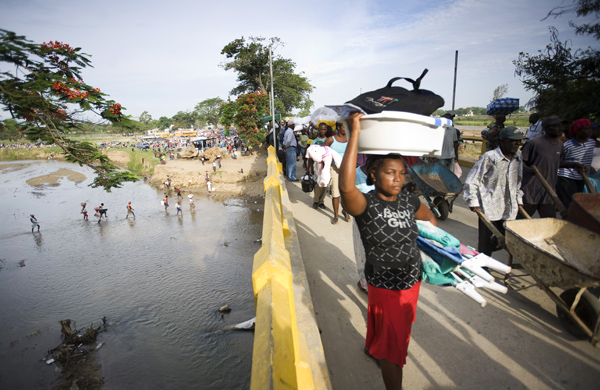 Dominican Republic Air Force helicopters retrieved the charred remains of four Haitians murdered in an inaccessible area near Loma El Bejuco, where they were allegedly burning trees to make charcoal. Army soldiers of the 5th Brigade based in Barahona found the four bodies in the section Pinos del Edén near the town La Descubierta, a rugged area reached only on horseback, and radioed the helicopters which arrived to recover them, said Independencia province prosecutor Ruddy Pérez Medrano.

He said arrest warrants have been issued for four Dominican farmers who allegedly murdered the Haitians. They are said to be cattle ranchers who attacked the Haitians in reprisal for the burning of the forests along the border. Authorities are trying to determine if members of the Dominican military are involved in the deaths.

Thursday’s market at Jimani was suspended after the incident and Haitians prevented Dominican trucks from entering Haiti through the nearby border crossing at Malpasse, although transit was restored by Friday morning.

Tensions have escalated near the Haiti-Dominican border recently, as the Dominican government has mounted a campaign for reforestation of the area. The campaign, which has focused on bolstering the Dominican people’s protection of the forests, has brought unwelcome attention on Haitians, whose own territory has been severely deforested.

For the original report go to http://www.dominicantoday.com/dr/local/2009/10/23/33644/Dominican-choppers-retrieve-remains-of-4-Haitians-arrest-warrants-issued

3 thoughts on “4 Haitians murdered near the border, arrest warrants issued”