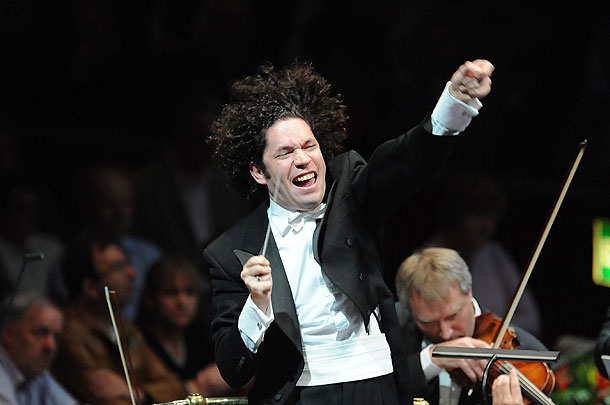 On the day before yesterday, Gustavo Dudamel, the 28-year-old Venezuelan conductor, held his first rehearsal at the Los Angeles Philharmonic as its new maestro. Wearing trendy black sneakers and a persistent smile that showed the sheer fun he’s having directing one of the world’s premiere orchestras, he later met with reporters for what turned out to be a geography lesson. Asked by a reporter what he had on  his iPod, Dudamel answered that he loved Latin music and was listening to the likes of Venezuelan salsa star Oscar D’Leon and Dominican crooner Juan Luis Guerra. Then the reporter said: “You are in America now, what Americans?” Dudamel didn’t miss a beat and shot back ”I am talking about Americans!” — to which the room packed with journalists erupted in laughter and clapping. That Latin America is indeed part of America is something that Dudamel brings up often, but always with good humor and patience.  At his news conference he reiterated that America is one — Argentina, Venezuela, Mexico, the United States, all included. That message is likely to resound in Los Angeles, a city that is half Hispanic and home to millions who migrated from southern portions of the Americas.

He also told reporters that “classical music is cool,” and they seemed to believe him.

Dudamel, who first picked up the baton at age 11, emerged out of Venezuela’s extensive classical music education program called El Sistema, which some cities in the United States are seeking to emulate.Los Angeles’ cultural community has high expectations for their new maestro, starting with his first performance as musical director, a free concert for 18,000 people at the Hollywood Bowl on Saturday.

Dudamel, who will spend a good part of his time in Los Angeles working with the Youth Orchestra LA, said he feels responsible for sharing the joy of orchestral music to a new generation, and start several other youth ensembles in Southern California.

“One very important thing is to bring all the community to music. It can sound romantic, it can sound crazy. People can say, ‘Oh, the boy is just talking,’ but dreams can come true,” he said.

For original reports go to http://www.google.com/hostednews/ap/article/ALeqM5jEfxGMbNgBsRR84oVaJKyaNeEcAwD9B29FVO4