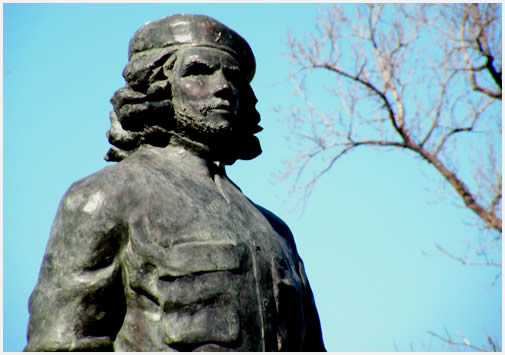 Unknown persons damaged a bronze statue honoring Ernesto “Che” Guevara in Rosario, the Argentine city where the icon of the Cuban Revolution was born, a municipal official said Tuesday. Horacio Ghirardi said that the act of vandalism was committed last weekend by “someone who does not like this figure or had the intention of robbing or damaging it, just because.” The sculpture suffered cuts indicating the intention to remove the legs. The sculpture, which stands 4 meters (13 feet) tall and weighs three tons, was unveiled on June 14, 2008, on the occasion of the 80th anniversary of Che’s birth.

Ghirardi said that as the years have gone by, the figure of Che Guevara has become part of Argentine culture, but “there are sectors that remain opposed” to the installation of the guerrilla’s sculpture in Rosario.The work, created by sculptor Andres Zerneri with the smelting of some 75,000 donated keys and other bronze objects, is a full-body statue of Che, walking and wearing a beret, with long hair and his gaze fixed on the horizon, an expression copied from a famous photo by the Cuban photographer Alex Korda in Havana in the 1960s.

For the original report go to http://www.laht.com/article.asp?ArticleId=345616&CategoryId=14093