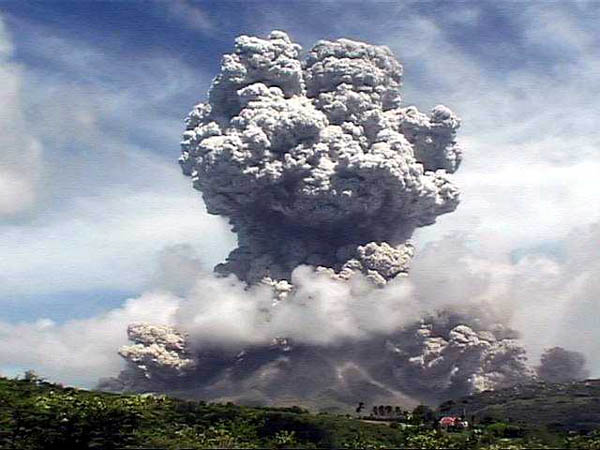 The Soufriere Hills volcano of Montserrat shot a two-mile-high plume of ash into the sky yesterday, leaving a light coat of dust over the island. The venting by volcano has been accompanied by more than 30 tiny earthquakes since Sunday night, according to Paul Cole, director of the Montserrat Volcano Observatory. He said it was the volcano’s first sign of activity in 10 months. “It’s just a reminder that the volcano is still active,” said James White Jr., acting director of the Disaster Management Coordination Agency. “It isn’t something for us to panic over.”

Ash released in several bursts from the volcano blew south of Old Town and Olveston, leaving only a light coating in the island’s inhabited areas. But the observatory said more ash could fall depending on the wind direction. Soufriere Hills became active in 1995 and killed 19 people when it erupted two years later, burying much of the British territory and prompting half its 12,000 inhabitants to leave. Many of those have not been able to return, as portions of the island remain uninhabitable. They have been awarded British citizenship.

For the original report go to http://www.google.com/hostednews/ap/article/ALeqM5jvgfO0q75A8CKnzvB8Ok6oTLud1AD9B53IOG0

2 thoughts on “Montserrat volcano shoots plume of ash into sky”