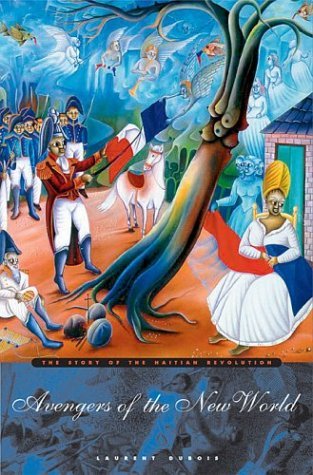 MRzine, a project of the Monthly Review Press, has just posted a review of Laurent Dubois’s Avengers of the New World: The Story of the Haitian Revolution, a book published by Harvard University Press in 2005. Here are some excerpts from the review. The link to the complete review is below:

What stands out in Dubois’s work is the continued relevance of the Haitian Revolution for postcolonial studies.  It is no accident that James, seeking independence for Trinidad, commemorated the Haitian Revolution in 1938, or that Césaire celebrated Louverture at the height of pan-Africanism in 1960.  As Dubois demonstrates, colonial powers often grappled with opposing agendas between elites in the metropole and powerful colonists, as well as with defining how universal policies at home would translate to the varied colonies abroad.  He also shows how the violence of the revolution by both insurgents and state representatives can rupture society, blurring the lines between victim and perpetrator and inflicting deep societal wounds that cannot heal with independence alone.

It is remarkable how the postindependence social, political, and economic struggles of nineteenth-century Haiti — which resulted in perpetual debt to France for reparations exchanged for national recognition — are echoed in so many twentieth-century postcolonial societies that achieved independence in largely different historical contexts.  Dubois’s accessible narrative is a must-read for students and scholars of Caribbean studies, modern Europe, and any number of regional foci in colonial and postcolonial studies.  After reading this work it comes as no surprise that Dubois was the recipient of awards from the Los Angeles Times for Best Non-Fiction Book of 2004 and the Christian Science Monitor‘s Notable Book of 2004.

For the complete review go to http://mrzine.monthlyreview.org/hendrickson220909.html