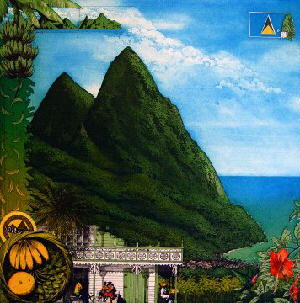 “Islands in the Caribbean and Off the Coast of Africa,” an exhibit by Dutch artist Rolf Weijburg, is running until October 10 at the WM Gallery in Davie, Florida. The exhibit offers “etched images from an inspired traveler who mixes history, culture, and nature into a single shot.” Weijburg explains that his prints “tell stories by melding images and diagrams of the geography, animals, plants, architecture, and the people of the places I explore.” He sketches, takes photographs, and makes audio-recordings during his travels, and then back in Holland, Weijburg turns this material into etchings. The exhibit shows selected works from his book ‘L’ Afrigue Peripherique, a collection of 85 color etchings, plus his sketches, photographs, and some accompanying travel stories written in Dutch. 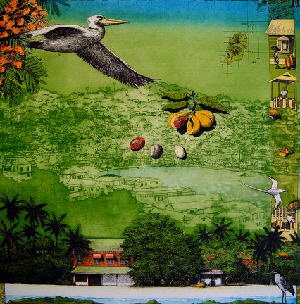 Weijburg was born in Eindhoven, the Netherlands, in 1952. Originally studying social geography and cartography at the University of Utrecht, he switched to the Academy of Fine Arts in the same town and concentrated on printmaking and the graphic arts. He has followed the tradition of many Dutch artists since the 17th century who traveled abroad, usually to the southern regions of Europe. After extensive travels through Southern and Eastern Europe, Weijburg’s etchings took a turn to Africa following a year’s voyage through the Middle-East and East and Central Africa, in 1979. Many more travels through and around the African continent have followed, providing him with an endless flow of inspiration.

Images: “St. Lucia” and “Grenada” from Islands of the Caribbean and Off the Coast of Africa.